Australia have not won an Ashes series in England since 2001, with their batsmen repeatedly struggling against the likes of James Anderson and Stuart Broad armed with the Dukes balls.

England will continue to use balls thought to favour their pace bowlers when they face Australia in a home Ashes 2019 series later this year.

Australia have not won an Ashes series in England since 2001, with their batsmen repeatedly struggling against the likes of James Anderson and Stuart Broad armed with the Dukes balls.

A new Dukes ball with a less pronounced seam that deviates less off the pitch and so, in theory, ought to make life easier for batsmen, has been in use in English county cricket this season.

But England and Wales Cricket Board managing director Ashley Giles said they had asked Dukes to make a batch of some 500-600 balls to the same specification as those used for Test cricket in England during the past two seasons.

Giles, a former England spinner, said the aim was to ensure a “fair contest” between bat and ball rather than have bowler-friendly “two-day Tests”.

The balls used in this season’s Championship are wound tighter at the seam and scores in English cricket’s domestic first-class competition are considerably higher than at a comparable stage in 2018.

The ECB said: “It is felt that the 2017-18 specification Dukes ball on Test match pitches has produced highly entertaining cricket that has helped promote the Test format.

“The 2019 Dukes ball, used during this year’s Specsavers County Championship, has been produced with a slightly less prominent seam.

“This was done at the instruction of the ECB cricket committee, conscious of the balance between bat and ball on county pitches, especially during the early and latter parts of the season.” (ALSO READ: This summer will be amazing, but gruelling: Jonny Bairstow on World Cup, Ashes)

England have informed both Cricket Australia and Cricket Ireland, who visit Lord’s for a one-off Test in July, of the decision.

Cricket balls vary greatly between manufacturers, with the Kookaburra that has long been standard in Australia having a less pronounced seam.

Australia, in a bid to try to get used to English conditions, used the 2017/18 specification Dukes ball in second half of their recently concluded 2018/19 first-class Sheffield Shield tournament.

But with weather and pitch conditions also affecting the movement of the ball – grey skies and green-tinged pitches that are more common in England than in the warmer climate of Australia tend to offer more movement to quicker bowlers – it remains to be seen how much this will help the tourists when the Ashes start at Birmingham’s Edgbaston ground on August 1. 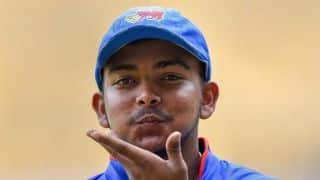