England captain feels Sri Lanks's score was 20-30 runs too many.

Alastair Cook, the England skipper felt English One-Day International (ODI) team lacked the killer instinct and that was the reason why his team failed to win yet another match in 50 over’s format. England lost their first ODI of the seven match series against Sri Lanka by 25 runs. Thanks to Mooen Ali’s hundred at the top and quick-fire 65 from Ravi Bopara at the late stages of the game, brought England close to a win but at the end they failed to cross the victory margin.

“Someone had to play the special innings to do it [chase down 317] and we got that special innings. That killed us from being 80 for one to 120 for four – you can put that down to rustiness I think. The way we went about our business with the bat was encouraging. We took the good options on and played in a really attacking way. The dressing room is pretty down when you lose a game. Mo played fantastically well to reach his first hundred and gave us a real shot of chasing down 320,” said the dejected skipper to ecb.co.uk.

Cook also praised the innings of Bopara, who was the last wicket to fall for the visitors. “He [Bopara] just needed someone to stay with him. If we’d have taken it down to the last over we’d have won that game, but we were always playing catch-up.”

However the England captain conceded they shouldn’t have been chasing as many as they were, “They got 20 or 30 too many. We bowled 16 wides and I think in the first 10 overs we didn’t bowl well enough at all and that really cost us because they got off to a good start. We dragged it back pretty well in the middle overs and towards the end in the powerplay. But at the death we always tend to concede too many.” Ishant Sharma — Is his current ODI form good enough to earn him a place in ICC World Cup 2015 squad? 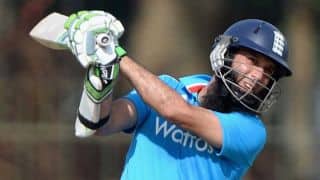