Mathews refused to get into a war of words with Vaughan, who earlier called his bowling as a 'county attack'.

Victory saw Sri Lanka take the two-match contest 1-0, after they had clung on for a draw in the first Test at Lord’s with just one wicket standing, and represented their first major series win outside of Asia since they triumphed in New Zealand in 1995. It was the first time Sri Lanka had won a Test campaign in England comprising more than one match and was the perfect riposte to Vaughan, who had damned the Lankan bowlers as “a glorified county attack”.

Mathews, named man-of-the-match in Leeds after Test-best contributions with both bat (160) and ball (four for 44 in England’s first innings), savoured a dramatic success. “It was an amazing victory. After the first Test went down to the wire, to the last ball, today (Tuesday) went to the last over as well,” said Mathews, who also made a hundred at Lord’s.

“Eranga bowled a brilliant ball to dismiss Anderson. I’d tried my best to change the bowlers, change the end and we pulled through,” the seam-bowling all-rounder added.

“I hope my attack is better than a county attack…there was a little bit of debate about that, that maybe my attack was not good enough for county cricket but I think we showed we are so I am happy.”

This could well be Sri Lanka’s last tour of England with batting greats Mahela Jaywardene and Kumar Sangakkara, aged 37 and 36 respectively, in the side.

But having overseen a genuine team victory this series, with the likes of unheralded paceman Dhammika Prasad taking a Test-best five for 50 at Headingley, Mathews was keen to point out how Sri Lanka had coped following the retirement of other star players.

Nevertheless, the 27-year-old added he wanted to keep Jayawardene and Sangakkara, both former captains, involved for as long as possible.

“I am trying my best to convince them so you never know,” Mathews said.

“It’s up to them to make that decision, but I’m doing my best because the way they are playing they can carry on forever.

“Already we don’t have (Chaminda) Vaas or Murali (Muttiah Muralitharan) in the team, but we have guys who are willing to do the job, work hard and are excited about playing Test cricket.”

Despite England resuming in dire straits at 57 for five, Jayawardene — who on Monday accused England of being fallible under pressure and said home captain Alastair Cook had erred in calling for an end to criticism from Australia great Shane Warne — was prepared for a long haul.

“I said to Kumar in the slips it would probably go to the last over and it did,” Jayawardene told BBC Radio’s Test Match Special programme.

“We had to really fight at Lord’s and here we had to dig deep,” added Jayawardene, who made a typically stylish 79 in Sri Lanka’s second innings 457.

“This is something special for us, our first series win in England,” insisted Jayawardene, making his fifth tour of the country.

“We always believed in our ability, we felt we had something special to give.

“The boys always try and give everything they have got, the way the quicks bowled was remarkable.

“They hit those areas which we haven’t done in the past.” 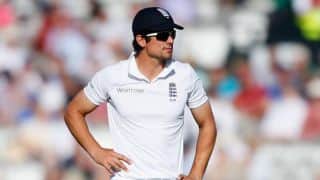