Warner has not drunk alcohol since prior to May when he toured West Indies.

Australia’s top-order hard hitting batsman David Warner that he will continue to avoid intake of alcohol in the ODI series against England as well. However, the 28-year old did say that he would had given up his abstinent instincts if Australia had won Ashes 2015. Warner has not drunk alcohol since prior to May when he toured West Indies. He did this to keep his body fit and his mind in playing condition and free of distractions. The feisty left-hander said that if Australia had won against arch-rivals England it would have called for a toast and he would have celebrate with his team-mates with a glass of beer. READ: David Warner apologises to Joe Root

In a conversation with Cricket Australia he said, “It’s been 100 days now so it’s quite bizarre. I did think I had it in me to do it but it’s about the discipline. I said from the start before I went to the West Indies that I wanted to give myself the best opportunity to get through the West Indies, the Ashes, a home series, to give myself the best opportunity because we have a lot of cricket to play and I’ve got to keep my body fresh and by doing that and by all means. You can celebrate and drink but at the moment I don’t feel we’ve had anything to celebrate.”

“We’ve won a couple of Test matches and you’ve got to enjoy your wins because they’re very rare to come by. Had we won the (Ashes) series I probably would have had a drink. For me it’s about a personal choice and I’m feeling for my body for the longevity of my career so I’ve got try and put myself and the team first. For me to have a good career and a long career I’ve got to sacrifice little things to help the team and my part is to not drink at the moment. By all means I’m not going to stop drinking forever. If I feel there’s a need to have a drink I will.”

Going back in the past Warner had a spat with England batsman Joe Root in a nightclub in 2013. The fallout was that Warner was banished to Africa with Australia A and missed the first two Tests of the 2013 Ashes series. From then on Warner has married his girlfriend Candice and became one of the most dangerous batsman across the globe. He was also given the responsibility of vice-captaincy. There are other players too who don’t drink alcohol or rarely take a glass or two in a year. READ: The Ashes 2015: David Warner looks back on his infamous ‘punch’

“Look at someone like Peter Siddle, hasn’t had a drink in three years. It’s just a thing you can do after cricket as well. It’s part of our culture, not saying I gave up drinking because I couldn’t control myself or anything like that. It’s just the thing that’s been ingrained in myself over the last four-six months. I look at my wife (ironwoman Candice) for an example, the 15 years she dedicated to her sport and she probably would have drunk three or four times in her career. It’s those little discipline things that can keep you from playing one year to five years but that’s just my choice, that’s my opinion and at the moment I’m not going to stop drinking. (I) just feel like at the moment I don’t need anything,” Warner signed off. ALSO READ: Ashes 2015: David Warner, Joe Root friends once again! 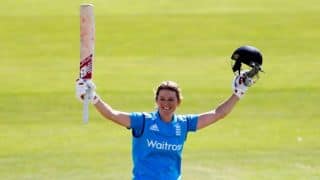