What a performance from the Australian bowlers today! Well, one would assume there might not be a lot of difference in a 4th day wicket and a 5th day wicket but it seemed like Australia bowled on a completely difference surface than what England bowled on yesterday. They managed to take 4 wickets in the first session and 6 in around an hour and 30 minutes in the second. The star with the ball for Australia – Nathan Lyon. Credit has to be given to Pat Cummins as well as he was brilliant on a wicket which did not assist the pacers a lot.

52.3: Pat Cummins to Chris Woakes. out, OUT! Caught! That is it! Woakes’ lone battle comes to an end! Cummins bangs one short,Woakes looks to leave but the ball is close to the body and he ends up playing it late. The match lobs off the upper half of his bat towards second slip. Fittingly, the last catch is taken by Steve Smith!

47.4: Nathan Lyon to Stuart Broad. out, OUT! Caught at slip! A golden duck for Broad. Two wickets in two balls for Lyon. He has 6 now. Another left-hander falls prey to him. He floats it on off and gets this one to turn away too. Broad plays the original trajectory. The ball kisses the outside edge and this time Smith at first slip takes it. Australia a wicket away now and Lyon is on a hat-trick.

47.3: Nathan Lyon to Moeen Ali. out, OUT! TAKEN! Any guesses who gets Moeen Ali? It can’t be that difficult for you to guess. I’ll give you an hint, he has dismissed Moeen Ali 8 times in Tests before this one. Nathan Lyon it is. His fifth wicket. His 15th in Tests. It was him who Australia were going to rely on today and he delivers. Lyon tosses it up on middle, it pitches and turns away. Moeen Ali does not account for the turn. An outside edge which goes straight to Warner at second slip.

37.1: Nathan Lyon to Ben Stokes. out, OUT! EDGED AND TAKEN! Ben Stokes is out of here now. Three wickets away from a victory are Australia. Lyon has 4 to his name. Another tossed up ball around off, it pitches and turns away. Stokes defends inside the line, the ball kisses the outside edge and goes into the mitts of Paine.

36.6: Pat Cummins to Jonny Bairstow. out, OUT! That is off the strap of the glove, since Bairstow has the bat in his hand, he has been adjudged out. England six down and Bairstow walks back after another failure. Cummins has his third. Another good short one, this one though does not rise a lot. Bairstow looks to sway out of the way but the ball seems to hit the glove and lob towards third slip where Bancroft takes it. An appeal, the umpire thinks, thinks and then gives it. Bairstow reviews. Replays roll in and it shows that it is off the strap.

32.6: Pat Cummins to Jos Buttler. out, OUT! Knocked him over! Australia are all over England at the moment. Half the side back in the hut for England. Ideal start to the session for the visitors. 5 wickets away now from taking a 1-0 lead. He started the over with a beauty and ends it with another one. This is slightly fuller around off, it pitches and comes back in. Buttler should have been playing ahead but he opts to stay back. The ball till then sneaks through and hits the top of off. Cummins is absolutely elated. His second today. He has been superb in this innings.

Lunch! No question who this session belonged to. Australia have dominated the morning session on Day 5. They wanted wickets in the first session and they have got 4 of them. It all hinged on how would Nathan Lyon do on this turning wicket and he has done remarkably. The GOAT has picked three wickets, including the big wicket of English skipper, Joe Root. Denly and Roy were his other victims. Lyon has been well supported by the trio of fast bowlers. In a pitch where there has been nothing for the seamers, Cummins, Siddle and Pattinson have bowled with determination and aggression not allowing England to get any easy runs. Cummins was the other one to get into the wickets column.

3 wickets for Nathan Lyon. He is on a roll. 29.1: Nathan Lyon to Joe Root. out, OUT! Caught! Body blow for England! Their skipper is out of here and the man who was going to be dangerous has got his third victim. A proper off spinners wicket this. Flighted delivery outside off, it spins in. Root looks to defend but the ball spins in more than he expected. It takes the inside edge of the bat and goes straight to short leg. Bancroft there does really well and takes a very good sharp catch.

21.2: Nathan Lyon to Jason Roy. out, OUT! TIMBER! What was Roy doing there? He has literally thrown his wicket away. His patience runs out. He was playing so well, leaving the balls outside off, showing so much responsibility but eventually but rush of blood has cost England here. Two down now 8 to go. Roy dances down the track as Lyon tosses it up out side off. Roy is nowhere near the pitch of the ball but still tries to go big. The ball turns back in. He misses and the stumps behind are disturbed.

Peter Siddle to Joe Root. no run, NOT OUT! There is an inside edge and a big one! The umpire is really not having a good day here. His second wrong decision today. This is on off and it jags back in. Root looks to defend but there are two sounds. One is surely of the ball hitting the pad. An appeal follows and the umpire raises the finger. Root reviews and Ultra Edge shows there is a big spike.

James Pattinson to Joe Root. no run, NOT OUT! Going down leg! A successful review by Root. England will breathe a sigh of relief as this would have been a body blow for England. Pattinson angles this into the pads. Root looks to flick but misses to get hit on the pads. The ball rolls towards the leg side as the batters run a leg bye. In the meantime, the bowler is appealing. The umpire raises his finger. Root reviews immediately. Replays roll in and they show the on-field call has to be overturned. Also, the run will be cancelled as the umpire had given Root out.

Big moment in the game! Root has been given out LBW. He reviews. This could be a good review.

WICKET – Pat Cummins to Rory Burns. out, OUT! In the air… taken! 1 down, 9 to go! Cummins bowls an absolute brute of a delivery to get the centurion of the first innings. It is shorter in length and Cummins bends his back on this one. Skids through and also gets big on the batter. Burns does not have enough time to move out of the way so he looks to fend at it. The ball hits the higher portion of the bat and lobs towards point where Lyon takes a dolly. Early wicket for Australia, ideal start for them.

We are all set to begin Day 5. It is bright and sunny at the moment which is probably good for England. Their batters, Jason Roy and Rory Burns, will resume their innings. The Australian players are out in a huddle. They seemed quite relax. The visitors now make their way to the middle. Pat Cummins, who did not bowl an over yesterday, will start the proceedings for Australia. Three slips and a gully in place. Here we go…

The equation is simple today, Australia need 10 wickets to take a 1-0 lead whereas England have to score 385 in around 90 overs if they are to win the first Test. The latter part looks improbable so one would assume, the hosts would look to play out for a draw. The wicket yesterday was on the slower side but being the 5th day, there might just be more wear and tear and more assistance to the bowlers. It is not going to be easy for the home side. The first session, actually, the first hour is the important one. If England play that out without much damage, they would back themselves to save this game. An exciting day of cricket waits ahead. Welcome to the coverage.

England on the other hand, will probably first try and save this game! They need another 385 runs but scoring that in one day, is quite impossible. The hosts need to go session by session and then analyze their position and then see how they need to go about things. They have a batting line-up capable of surviving a whole day but will they be able to do so?

Australia can be very pleased with where they are in the game at the moment! However, one could argue they could have declared a lot earlier. Hindsight thought is always a good thing. They still are favorites to win this game after tons from Smith and Wade. They have around 90 overs on Monday to take the 10 England wickets and by the look of things, the wicket is assisting the spinner so probably, Nathan Lyon will be the key for them.

England will enter Day 5, without any damage being done! Their openers have survived the nervy period. There were many oohs and aahs but they will be happy with the fact that they have not lost a wicket. They though are still way behind in the game. 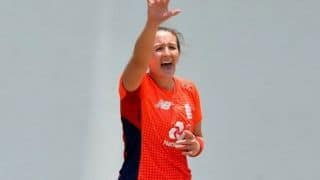 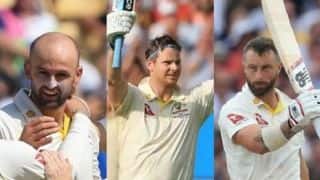