Hello and welcome to CricketCountry's coverage of Day Three of the first Ashes Test played between, of course, England and Australia. After bowling out England for 215 thanks to a fifer from Peter Siddle, in reply, Australia were tottering at 117 for nine. 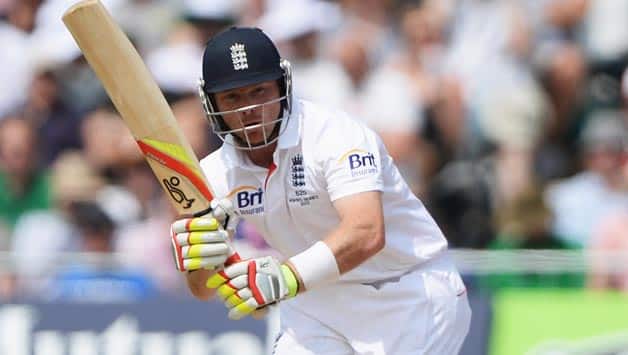 So, that’s stumps then. An eventful lst hour of play where Stuart Broad nicked a ball to slip, refused to walk and was given not out by the umpire Aleem Dar. Broad and Bell will go into Day Four unbeaten on a 108-run partnership. England are in total control of the match now with a lead of 261 runs. Join us again tomorrow for Day Four.

Wow… Things hotting up at Trent Bridge. Stuart Broad clearly nicked one to slip, given not out and no Aussie reviews left! @bbctms

Ian Bell and Stuart Broad have brought up their 50-paertnership. Their lead is now over 200 and surging towards the 250 mark, which would be a comfortable position to be in.

England have taken tea 165 runs ahead of Australia. They would like that lead to go to a minimum of 250 by the end of the day’s play. Ian Bell is looking solid and confident. He’s been under pressure after a string of failures and has done really well to revive England’s middle order.

Matt Prior’s aggressive little innings comes to an end as he pulls Siddle straight to mid-wicket. He was living by the sword and this was waiting to happen. Really don’t see what’s the hurry when you’ve got two whole days left after today.

Ian Bell and Matt Prior are slowly shaping their innings and increasing England’s lead. The hosts will be looking at a minimum of 200 as a good enough target for Australia. However, even that may not be enough. Meanwhile, in case you have forgotten, today is the fourth anniversary of England’s Great Escape – the miracle of Cardiff.

Feel very sorry for Michael Clarke. His vertebrae are about as reliable as Pakistan’s top order. #Ashes pic.twitter.com/dRVF7lIrrv


Australia have taken the new ball at the end of the 83rd over.

England currently have a lead of 109. The lowest target successfully defended in a Test Match at Trent Bridge is 186 (SA v England in 1951)

Bell and Bairstow amble on at a run-rate just over two. They have seen through James Pattinson’s first spell after lunch and Michael Holding is praising their kontrol (read: control) of shots. And just as I type that, Ian Bell has been adjudged leg-before in Shane Watson’s first over after lunch. However, Bell reviews and HawkEye says it’s missing leg by a few millimetres! Finally, technology going England’s way.

However, Agar comes in next over and takes Bairstow’s edge. That’s his second wicket. What a debut he is having!

Bell and Bairstow hold fort till lunch as England go into the break 92 runs ahead of Australia.

Ian Bell and Jonny Bairstow are grinding it out in the middle. England need these two to stick it out there. Their lead is still not in three figures. Anything under 200 will be easy to chase for the Australians.

Oh, and Cook’s gone! Ashton Agar picks up his first Test wicket and what a wicket it is. Agar pitches it in the rough and the ball takes a vicious turn befoe clipping Cook’s bat’s edge and flying over Michael Clarke over slip, who leaps in the air and takes the catch one-handed. Australia are right back into the match!

Cook brings up his half-century with a flick to square-leg. Meanwhile, new batsman Ian Bell needs 50 himself to become the 14th Englishman to score 6,000 runs in Test cricket.

Kevin Pietersen chops James Pattinson’s fullish delivery wide of off-stump onto his middle stump to end a responsible knock. Just the breakthrough Australia would have wanted.

First signs of aggression from Alastair Cook as he steps down the track and whacks Ashton Agar over midwicket for a boundary. Cook and Pietersen have brought up their 13th century partnership in Test cricket.

Kevin Pietersen brings up his 31st Test half-century with another glorious drive through the covers for fours. He’s looking extremely confident here.

A steady start for England on the morning of Day Three. Both batsmen would be looking to bat it out as long as possible and take this match into a fourth day. Kevin Pietersen has been far more keen to play his shots today, unlike yesterday. He’s played a cracking cover drive off Mitchell Starc bowling around the wicket.

Hello and welcome to CricketCountry’s coverage of Day Three of the first Ashes Test played between, of course, England and Australia. After bowling out England for 215 thanks to a fifer from Peter Siddle, in reply, Australia were tottering at 117 for nine.

Young 19-year-old Ashton Agar took the matter in his own hands and played a record breaking innings of 98 batting at No 11. He added 163 for the final wicket with Phil Hughes.

Welcome to the important day of the Test match. Lots of enthralling action is in store.

I’m Jaideep Vaidya and I will be bringing you updates of the first Test. Read the live blog of Day one here and day two here.

For a quick review of Day 2, tap here.