England skipper Alastair Cook won the toss and elected to bat first in the second Test of the Ashes 2013 at Lord's. England take stumps at 289 for seven, giving Australia a slight edge going into Day Two. Steven Smith’s three for 18 got Australia back into the match after it seemed as if Ian Bell and Jonny Bairstow were running towards a huge total. Join us again tomorrow for Day Two.

There’s the third one! Smith finds Prior’s edge this time and he’s got a second consecutive three-for at Lord’s after his three for 51 against Pakistan at Lord’s.

Would you believe it? Steven Smith has another wicket! Off a full toss this time, no less. On a delivery that should have been smacked over long off, Bairstow can only hit it meekly straight back to the bowler. Australia had the new ball availabe, but Clarke decided to give Smith another go. The gamble sure has paid off.

And he’s gone! Bell’s gone! And to think that all it took was a part-timer. With none of his top five bowlers able to get any breakthrough, Clarke decides to get young Steven Smith into the attack. And Smith responds by finding Bell’s edge that is snapped up by Clarke at first slip. Bell’s gone for his second consecutive 109.

Ian Bell brings up his third century in consecutive Test matches against Australia with a steer past point for a single. He came in under pressure with England on 28 for three and has played a fabulous knock to follow up his Trent Bridge heroics.

I heard Stuart spent a whole day at a pedestrian crossing. The sign kept flashing “walk”.

Drinks in the final session of Day One as England continue to surge ahead on this flat track. Australia are toiling in the sun to no avail.

Bairstow brings up his fifty off 96 deliveries and his partnership with Bell has crossed the 100 mark. The track is now flat as ever as England continue to milk the runs and Australia don’t appear to have any answers. It’s up to England now to put on as many runs as possible in the first innings.

Some optimism (sarcasm ?) from Michael Vaughan:

Could be a career defining moment for Jonny Bairstow… #Ashes.

Some drama as the second session comes to a close. Bairstow was clean bowled by Siddle, but replays showed that there was a hint of overstepping. The third umpire felt that Siddle’s foot had landed ahead of the line, although it was a very marginal call. England reached the break with no further damage, and scored 103 runs for the loss of one wicket in the session.

Bell brings up his fifty with an uppish slice that flew just inches past the diving Phil Hughes at point. It’s been a delightful little innings from Bell so far. His confidence seems to have skied after the century at Trent Bridge.

New batsman Jonny Bairstow has joined a confident looking Ian Bell in the middle. Bell has hit eight fours in his 44 so far and is not afraid to play his shots.

Trott top-edges Ryan Harris’s short-pitched delivery high up in the air towards deep mid-wicket where Usman Khawaja runs in to take the catch. Australia have the breakthrough they wanted and England’s surge after lunch should end now. The partnership with Bell was worth 99 runs. Harris, meanwhile, has his third wicket.

After nearly half an hour after lunch many have still not returned to their seats. At Wimbledon it would raise howls at Lord’s not a whimper

Jonathan Trott brings up his fifty as England cross the 100 mark in the second session. This is turning out to be a good partnership between these two.

England have reached the lunch break without further damage. Trott and Bell have done well since coming together at 28 for three. They would look to carry on and post a big one.

Trott and Bell have done well to steady the early wobbles of the England ship. They have negotiated a probing spell of full-pitched bowling from the Australian quicks really well. Still no spin for Australia as we approach the last half hour of play before lunch.

Trott and Bell are playing for their lives here. Big partnership, this, for England. The Australians are not making it any easier and are being extremely chirpy, according to the commentators.

Australia off to the perfect start at Lords. Big partnership for England with Trott & Bell. Another wicket now would be “Gold”!! #Ashes2013

England have won the toss and elected to collapse #Ashes

More drama as Ryan Harris raps Joe Root in front, and is given out. Root goes for the review and Hot Spot shows the white spot of bat hitting something. The question is whether it hit the ball or the pad, to which it was very close to. After a lot of replays, the third umpire decides that the ball hit the pad firstbat hit pad, and not ball. More DRS controversy?

Harris isn’t done yet as he gets the dangerous Kevin Pietersen to edge one to wicketkeeper Brad Haddin! What a sensational start we’re having here!

Michael Clarke brings on Shane Watson straight away in the fifth over (Don’t see eye to eye, is it?) replacing James Pattinson. And Watson responds to his captain’s faith immediately as he traps Alastair Cook in front. This is a big wicket for Australia! The England skipper is gone within five overs.

The Queen shakes hands with Ashton Agar. “It’s an honour and a privilege to meet you,” says The Queen.

I get the feeling that winning the toss at Lords today was crucial!!! I predict a big day of runs for England


England skipper Alastair Cook won the toss and elected to bat first in the second Test of the Ashes 2013 at Lord’s.

Australia have gone in for a couple of changes in their side, bringing in Ryan Harris and Usman Khawaja for Mitchell Starc and Ed Cowan, respectively. “I do not have much of a say in the selection and so I back the selectors,” says Clarke. “Harris gives aggression to the bowling. Khawaja has been in superb form in the last 12 months.”

England, on the other hand, have just the one change. They have picked Tim Bresnan in place of Steven Finn.

Hello and welcome to CricketCountry’s coverage of the most-awaited blockbuster series of the season, the Ashes 2013. After an excruciatingly narrow 14-run loss at Trent Bridge, Michael Clarke & Co. will look to get the better of England and level the five-match series in the second Test at Lord’s. For that, however, they have to play out of their skins like they did in the 1st Test. Can England carry the momentum forward and go 2-0 up? Or will Australia manage to pull one back? We will only know over the course of the next five days starting today. 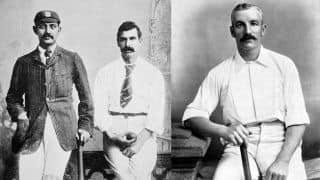