Hello and welcome to CricketCountry's coverage of the most-awaited blockbuster series of the season, the Ashes 2013. I, Sarang Bhalerao, will bring you momentary updates of the action from Day Two of the third Test in Old Trafford. 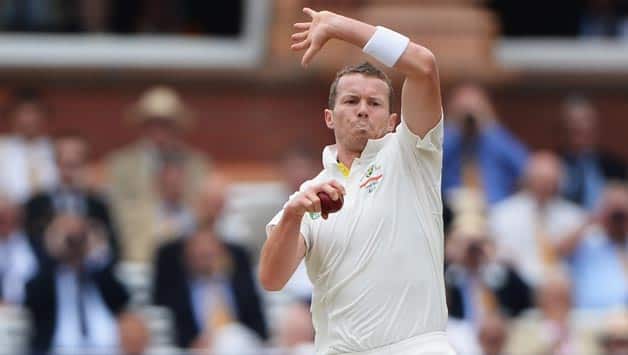 Clarke’s 187 was the highlight of the day. Haddin and Starc added 97 for the eighth wicket and Australia managed 527 for seven.

Siddle picked up two wickets and made Day Two Australia’s. Do join us for the live updates of the third Test tomorrow.

England survive a few nervy moments. Cook would have been run out had Warner hit the stumps direct. Trott’s edge was found in the last over but the ball fell short of Clarke at the second slip. Australia are all over England. The day belong to Australia.

Peter Siddle has nightwatchman Tim Bresnan. The batsman is not too sure. He consults with Cook and decides to walk. The replays suggests that there is no edge. That is a bit of waste of a wicekt. In walks Jonathan Trott at No 4. Australia are on top.

Peter Siddle has Joe Root. Siddle went wide of the crease and bowled the ball that held it’s line. Root edges it and is caught behind by Haddin. England lose their first wicket at 47.

Nathan Lyon is troubling the England openers. Australia are looking for a quick wicket. The openers have struggled but still there is no fall of a wicket.

Nathan Lyon is bowling beautifully to Alastair Cook. The England captain is looking uncomfortable. He survives a caught behind off Lyon’s bowling.

A steady start for England. Australia bowlers Ryan Harris and Mitchell Starc are on the money. England are battling a tough time. They will be looking to play out the remainder of the day without any jitters.

Did England miss Monty Panesar? The only spinner Graeme Swann picked up five wickets. But now they have their work cut out. A good batting perfromance is needed.

Australian skipper finally decides to declare with a brief stint after tea. The unbeaten 97-run partnership has surely given Australia a good first innings total to challenge the formidable England side. With over 500 on board, the pace trio of Ryan Harris, Mitchell Starc and Peter Siddle come hard at the England batsmen. Harris will be the key among the pacers after he troubled the batsmen in the second Test.

Haddin-Starc have helped Australia reach a challenging total of 500-plus. England bowlers are toiling. It has been unusual for them. Australia surely will be looking to declare the innings soon. Do join us after tea session for live updates.

Haddin-Starc have brought up fifty run stand. Just when England looked like making a comeback in the game this partnership has ensured that Australia reach close to the 500-run mark.

Australia bring up their 450. It has been an excellent platform. England are chipping in with wickets but Australia are happy with this position.

Swann has his 17th five-for. Look at the elite list of England bowlers who are ahead of him.

Graeme Swann has 17 5-fors, putting him equal 3rd for England with Trueman & Underwood. Only SF Barnes (24) and Botham (27) have more #Ashes

Swann has a five-for. Siddle swiped across the line. Swann has picked up his three wickets on Day Two. England are back in this match.

Clarke falls for 187 as he tried to late cut Broad. Broad has his 200th Test wicket. It took him a long time though.

Australia have scored 26 runs so far in six overs. The run-rate is above four runs per over and the batsmen are looking comfortable.

The last time Australia reached 400 in a test they lost by 6 wickets to India ! #ashes #ReturnTheUrn mind you we only scored 408 !

Australia have scored 89 runs in the session and England have taken two wickets. Graeme Swann picked up two wickets but captain Clarke is still batting very well. He offered a tough chance to Swann at short extra-cover. This was an absorbing session. England would look to restrict Australia under 500.

Anderson is indanger of eclipsing his worst ever bowling performance.

Wonder what made Warner take the review when he had clearly hit the ball.

David Warner after reviewing a catch off a BIG edge: “Hey, with Dharmasena as 3rd umpire, you never know mate!” #Ashes

David Warner falls to Graeme Swann. He is declared out as the edge from Warner hits ‘keeper Matt Prior’s pad and pops up to the first slip. Tony Hill gives it out. Warner calls for a review. DRS confirms the edge. A wasted DRS call from Australia.

Michael Clarke brings his 150. What an innings from the captain. He celebrates that achievement with a straight drive past Bresnan. He follows it up with a ferocious cut past point.

Steven Smith tries to play an audacious shot against Swann and mistimes. The ball flies high and Jonny Bairstow catches a high catch at mid-wicket. Smith had the best chance to score his maiden century. But he misses out.

David Warner is booed as he walks out. Crowd has surely come alive.

History repeats itself. Will it repeat in 2013?

200 partnership up between Clarke and Smith. Their record grows. Australia 3-329 #Ashes #ReturnTheUrn

Wicket on a “knock the stumps over” no ball. That’s unlucky. Pity, England. #ashes

This stand between Clarke and Smith is now the highest fourth wicket stand at Old Trafford. Clarke gets off the mark in a streaky fashion hitting a boundary. The ball finds the thick outside edge past gully for a boundary. He then follows it with a fantastic drive through cover point.

Australia have started in a sedate fashion. Smith is looking comfortable in the middle. Will he be able to score his maiden Test century?

A quick update on the weather forecast

Hello and welcome to CricketCountry’s coverage of the most-awaited blockbuster series of the season, the Ashes 2013. I, Sarang Bhalerao, will bring you momentary updates of the action from Day Two of the third Test in Old Trafford.

On the first day of the third Test, Australia started well after Michael Clarke won the toss and elected to bat first. They finished strongly on 303 for three. After Chris Rogers’s positive start early on, Clarke and Steven Smith added an unbeaten stand of 174 runs for the fourth wicket to take the visitors past the 300-run mark.

If you missed the game yesterday, you can check out the live blog and the talking points from the Day One. You can also check out the final report from the first day’s play as we wait for the action to begin on Day Two.

India vs Zimbabwe 2013: The positives and negatives for Team India