England lead the series 2-1 after victories at Cardiff and Edgbaston, and a win here would seal the series for the hosts.

England lock horns with Australia in the fourth Ashes 2015 Test at Trent Bridge, Nottingham, starting Thursday. England lead the series 2-1 after victories at Cardiff and Edgbaston, and a win here would seal the series for the hosts. Australia made a strong comeback at Lord’s after they lost the first Test comprehensively and they will look to make a similar comeback in Trent Bridge as well, as they are coming off an eight-wicket mauling in the third Test at Edgbaston.

England were handed a huge blow after they discovered that their fast bowler James Anderson will be out of action for this Test, following a side strain he picked up in the third. This will be a huge loss for England as he seemed to have returned to his best after going wicketless in the second Test at Lord’s. His injury will give an opportunity for Mark Wood to return after missing the third Test due to injury. Liam Plunkett and Mark Footitt have also been included in the squad, but looks like Wood will get the nod ahead of these two. Plunkett has not played a Test for over a year, while it will be a debut for Footitt, if he makes the cut. ALSO READ: Ashes 2015: James Anderson’s side strain reminiscent of Glenn McGrath’s twisted ankle in Ashes 2005

England rectified their top-order woes to a certain extent by dropping Gary Ballance and promoting Ian Bell to No. 3. Their opening partnership, however seems to be cause for concern as Adam Lyth has been far from convincing in his six innings so far. With a highest score of 37 and an average of 12 at the top is certainly not what England would have expected from him at the beginning of the series. Lyth is, however, likely to retain his place in the playing XI and will continue to open with his skipper Alastair Cook.

Australia too have batting troubles of their own. Nobody, barring David Warner, Chris Rogers and Steven Smith have scored runs.. Skipper Michael Clarke has had an abysmal series, registering scores of 38, 4, 7, 32*, 10 and 3 in his six innings so far. The Australia media has already questioned their skipper’s form of late, a few in fact calling for his head. A lot will depend on how Clarke manages to bounce back into — as captain, as a batsman and as a fielder (the lifeline given to Ian Bell in the third Test would have hurt Clarke a lot). Adam Voges has been well below par as well, and he should make way for the in-form Shaun Marsh. ALSO READ: Ashes 2015: Under-fire Michael Clarke needs expert help to battle himself out of danger

Australia’s bowlers too will have to step up to the plate. Josh Hazlewood has been the pick of the fast bowlers for Australia with 14 wickets. Mitchell Starc started off the tournament well, picking up a fifer in the first Test, but has managed to pick up just seven more wickets in the next two. Mitchell Johnson, on the other hand, seems to have gotten his rhythm and pace back, perhaps just as the right time as Australia need to win both the matches to win the series. Nathan Lyon’s off spin too will be crucial as he will be entrusted to get those crucial breakthroughs in the middle of the innings. ALSO READ: Ashes 2015: Nathan Lyon’s role in Australia’s bowling attack extremely critical

It is expected to be another excellent game with both teams looking to win for different reasons. England will look to take the series with a game to spare and Australia will look to win to stay alive with the hope to retain the urn.

Dale Steyn 'completes" unfinished over in Test in Portugal! 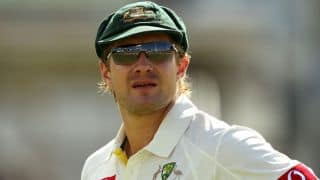 Ashes 2015: No plans to walk away from cricket, Shane Watson says