England restricted Australia to 264 for 5 on Day Two of the first Ashes Test at Cardiff on Thursday. Veteran opener Chris Rogers led the way by scoring 95, but he received little help from the other batsmen. The likes of David Warner, Steven Smith, Michael Clarke, and Adam Voges could have held on had their shot selection been better. Live Blog: England (ENG) vs Australia (AUS) Ashes 2015 1st Test at Cardiff, Day 3

Rogers continued his rich vein of form when he scored his seventh half-century in as many innings. Rogers entered exalted company in the process, emulated the likes of Sir Everton Weekes, Andy Flower, Kumar Sangakkara, and Shivnarine Chanderpaul. However, Rogers has not gone past 95 in the course of the seven-innings streak. Live Scorecard: England (ENG) vs Australia (AUS) Ashes 2015 1st Test at Cardiff, Day 3

Catch the live streaming of the third day of The Ashes 2015 first Test between England and Australia on starsports.com, and the live telecast of the match on Star Sports.

The concept of live streaming of cricket matches is quickly becoming vastly popular among fans of cricket. Those people who do not have the luxuty of sitting in front of television sets can access live cricket matches, scores, and updates through their cellular telephones, laptops, and even tablets. However, one has to be wary of how things function on the internet, as often the users looking for live streaming links end up opening objectionable content. 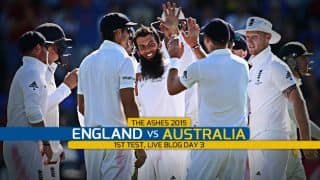