England and Australia will clash in the second Test of the ongoing Ashes 2015 series, at the iconic venue of Lord's starting Thursday.

England and Australia will clash in the second Test of the ongoing Ashes 2015 series, at the iconic venue of Lord’s starting Thursday. England lead the series 1-0 after their emphatic win in the opening Test at the Sophia Gardens in Cardiff, by 169 runs. Australia did not play the brand of cricket they are known for, as their bowlers struggled throughout the Test and the batsmen gifted their wickets to the English bowlers in both the innings. The availability of Mitchell Starc will boost the Australians, who was their pick among the bowlers in the opening Test. On the other hand, the inclusion of Mitchell Marsh should eke out the shortcomings they were facing with Shane Watson. Live cricket updates: England vs Australia, 2nd Test at Lord’s, Day 1

Australia captain Michael Clarke has expressed hope that his team is able to ensure a repeat of the Ashes 1997. It must be remembered that England have not lost an Ashes at home since 2001, and it will be a huge challenge for the touring party to change the history. READ: Ashes 2015 England vs Australia, 2nd Test at Lord’s: Preview

“I know Tub (Taylor) quite well I know what happened in ’97, and I think that’s something that yeah we can speak about in the team meeting. I’m disappointed with the result (in Cardiff) but I’m not too concerned, because I know how good these players are. We just got outplayed by England … we know we’re a better team than that,” Clarke was quoted as saying by AFP. Live cricket scorecard: England vs Australia, 2nd Test at Lord’s

Catch the live telecast of the second Ashes 2015 Test between England and Australia on Star Sports 1 and Star Sports HD 1, as well as on starsports.com.

The concept of live cricket streaming is rapidly becoming a rage among the cricket fans. Those who are not at their homes can always was the live cricket matches on their laptops, mobile phones as well as tables. But since there is a huge demand for live cricket streaming links, it often happens that cricket fans are misdirected to objectionable content. One has to be wary in this regards. READ: Ashes 2015: England must guard against complacency going into 2nd Test at Lord’s 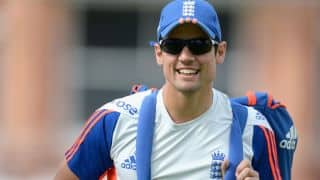