England are behind Australia's first-innings total by 374 runs.

England will face an uphill task of evading the follow-on, a target that is 175 runs away, when their No. 9 and No. 10 arrive to resume their innings on the third day of the fifth Ashes Test at The Oval. Accuracy and guile by Australia’s bowlers overall have induced mistakes by the opposition batsmen to have them struggling at 107 for 8 by stumps on Day Two. Seamers Mitchell Marsh and Peter Siddle, and off-spinner Nathan Lyon, were the chief wreckers, sharing seven of the eight wickets to fall; the other wicket was claimed by Mitchell Johnson. Their effort, backed by a responsible and sensible performance by their batsmen, has given them an enormous hold on the contest so far. LIVE CRICKET SCORECARD: England vs Australia, 5th Test, The Oval, Day 3

While Siddle helped do away with the top order, Lyon took two crucial wickets of Alastair Cook and Jonny Bairstow off two classical deliveries that breached the defences of the batsmen to strike timber. Marsh, the highest wicket-taker with three scalps, coaxed an edge out of Stuart Broad to remove him for a duck, had Joe Root faintly edging behind for 6, and had Stokes mistiming a hook for 15. England lost six wickets for 32. LIVE CRICKET UPDATES: England vs Australia, 5th Test, The Oval, Day 3

In the first two sessions of the day, Australia batted well to consolidate their position after an excellent first day with the bat. Steven Smith scored his 11th Test century, Adam Voges scored 76, and Mitchell Starc chipped in with an attacking 58, featuring in a quick partnership of 91 with Smith, to allow his team a peek at 500. They eventually settled for 481.

Live streaming is an increasingly popular means of catching live cricket on the go these days. All it needs is a suitable device and a decent internet connection, but care should be taken to avoid illegal streaming channels on the internet. 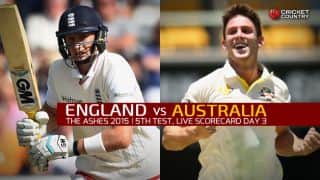