England will look to establish a huge lead that would enable them to seal the series.

England are well and truly in command of the fourth Ashes 2015 Test at Trent Bridge as they lead Australia by a mammoth 214 runs with six wickets in hand going into Day Two. Joe Root is still batting for England on an unbeaten 124, and he looks set to go on and get a huge score. Jonny Bairstow too played his part coming in at No.5, contributing 74 out of the 173-run stand between him and Root for the fourth wicket. Australia were earlier bowled out for just 60 after Stuart Broad picked up career best figures of 8 for 15. Australia were bowled out in just 18.3 Overs. Live Blog: England vs Australia, 4th Ashes 2015 Test, Day 2

England skipper Alastair Cook had earlier on Day One won the toss and elected to bowl first. oth teams went into the match with one change apiece. England got Mark Wood back into the playing XI after James Anderson sustained an injury during the third Test at Edgbaston. Australia got in Shaun Marsh in place of Mitchell Marsh. Catch live cricket scores and updates of England vs Australia 4th Ashes 2015 Test at Trent Bridge, Day 2 here

England already lead the series 2-1, having secured wins at Cardiff and Edgbaston. Australia fought back well in the second Test at Lord’s and humbled England by 405 runs. 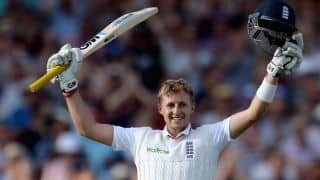