"Initially I thought there was a lot of turn and after the first over, I knew I was in the game."

India started the three-match ODI series on a winning note by defeating England by 8 wickets in the first ODI. England could only manage to post 268 before being bowled out, courtesy Kuldeep Yadav. Kuldeep took six-wicket haul to give a stop to England’s good start. He entered many record books as he became the first ever left-arm wrist-spinner to take six wickets in ODI. He recorded best bowling figures by a spinner against England, best figures by left-arm spinner and also fourth best figures by an Indian.

Talking further on that Kuldeep also commented on the pitch saying that there was some turn in the start. He even picked a five-wicket haul in the first T20I and admitted that is hoping for Test call as well.

“Initially I thought there was a lot of turn and after the first over, I knew I was in the game. If you are bowling in the right areas and you are using the variations perfectly, then it is pretty hard for the batsman. I know they will come back hard at us in the next game. I am hoping for a Test call.”

India will play the second ODI against England on July 14 at Lord’s, London. 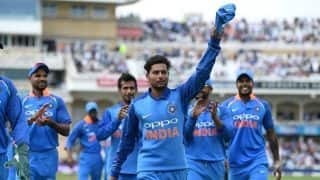