The live telecast of the match will be available on Sony Six, Sony Six HD for English commentary.

India is all set to take on England in the first T20I at Old Trafford, Manchester. Team India is ranked second in ICC T20I teams ranking whereas England is ranked fourth. The host have shown sheer dominance in their last T20I against Australia where they scored 221 runs and won the match by 28 runs. They recently whitewashed Australia in the limited overs series as well. India on the other hand have had a good run in limited over format as well. They comprehensively defeated Ireland in both the T20Is. The Indian players are in good touch after the Indian Premier League.

India will miss the service of Jasprit Bumrah and Washington Sundar who are ruled out of the series due to injury. They have been replaced by Deepak Chahar and Krunal Pandya respectively. Whereas, England’s Tom Curran will miss the series as he has not recovered from a left side strain.

When: The match is scheduled to played on July 3 at Old Trafford, Manchester 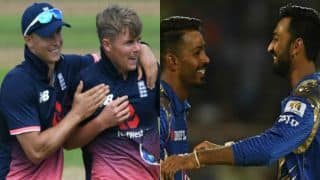