Alex Hales was the star batsman for the host who smashed unbeaten 58 off 48 balls to level the series.

England bounced back strongly winning the second T20I against India, at Sophia Gardens, Cardiff. They defeated the visitors by 5 wickets in a last-over thriller. Alex Hales starred for England: he remained unbeaten on 58 from 48 balls to help England level the series. His innings included 4 fours and 3 sixes; two of these sixes were hit out of the stadium.

Hales held his nerve till the end with changing partners. With 12 required in the last over, bowled by Bhuvneshwar Kumar, Hales lofted the first ball for a massive straight six. Bhuvi then bowled back of length, ball but to no avail: Hales dispatched it for four past fine leg. With 2 to win, Hales ran a single, and the in-form David Willey pulled the next ball to the mid-wicket boundary.

England got to a good start with Jason Roy smashing 14 off the first over of Umesh Yadav. However, Bhuvi made up for it, conceding only 2 in the next over. Umesh then clean bowled Roy (15 in 12 balls) with a straight, fast delivery.

Jos Buttler, who has been in the form of his life, struck Umesh for two boundaries in the same over. In Umesh’s third over, Virat Kohli dropped Buttler (then on 10) at mid-off. Buttler hit the next ball past mid-off for four, but ended up hitting the next ball again at Kohli. There was no mistake this time.

Joe Root came ahead of Hales, but failed to read the googly of Yuzvendra Chahal and was bowled. Hales and Eoin Morgan added 48 for the fourth wicket. Then, in the 14th over, bowled by Hardik Pandya, Morgan anticipated the bouncer and middled the hook, but also found Shikhar Dhawan near the ropes; Dhawan took an outstanding catch to dismiss him.

Jonny Bairstow timed sweetly, smashing two consecutive sixes off Kuldeep Yadav. Then, just when it seemed he and Hales would takes things away from India, Bhuvi got Bairstow in the 18th over. Trying to guide a short-pitched ball, Bairstow found Kuldeep at long leg.

In the first innings, India could only manage 148. The English pacers bowled a tight and consistent line. Willey and Liam Plunkett were the most miserly of the lot, with economy rates of 4.25 and 4.50 respectively. Kohli fought hard for his 47, while MS Dhoni got quick runs towards the end.

Man of the Match: Alex Hales. 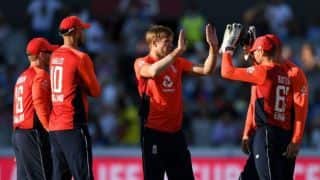