Statistical highlights of the fifth and final ODI between India and England on Friday. 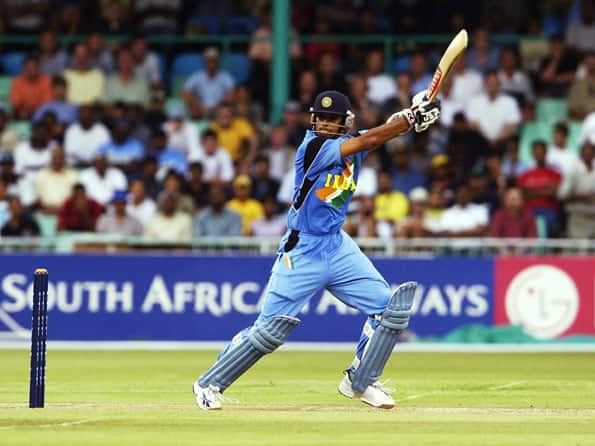 Rahul Dravid signed off his career in ODIs with a brilliant – 69 off 79 balls. His 83rd fifty in ODIs is his 11th against England Getty Images

Statistical highlights of the fifth and final ODI between India and England on Friday.

# Alastair Cook is the first England captain to win all five tosses in a bilateral series and the second English captain in ODIs. In the 1999 World Cup, Alec Stewart had won all five tosses.

# Virat Kohli (107) became the second Indian batsman to post a hundred against England in England.

# Kohli’s knock is the highest by an Indian batsman against England in England, surpassing Sachin Tendulkar’s 105 not out at Chester-le-Street on July 4, 2002.

# Kohli has posted six centuries in ODIs – two against Bangladesh and one each against Sri Lanka, England, Australia and New Zealand.

# Kohli has posted three hundreds each in India and away from home.

# Bopara and Bairstow managed 75 (unbroken) in only 40 balls at a run rate of 11.25 – England’s second best for the fifth wicket in terms of run-rate.

# On his debut in ODIs, Jonny Bairstow received the Man of the Match for registering an unbeaten match-winning 41 off 21 balls – his strike rate being 195.23.

# England’s 3-0 series victory is their largest in a bilateral series against India without losing a single ODI.

# India posted their highest total in international games against England in 2011, outstripping their 300 in The Oval Test.

# Rahul Dravid and Virat Kohli shared a third-wicket stand of 170 – India’s highest against England in England, bettering the 104 between Sourav Ganguly and Dravid at Birmingham on August 27, 2007.

# The partnership is India’s second highest for the third wicket against England – the highest is 175 between Navjot Singh Sidhu and Mohammad Azharuddin at Gwalior on March 4, 1993.

# The stand is the highest for any wicket at Sophia Gardens, eclipsing the 154 for the first wicket between Herschelle Gibbs and Graeme Smith for South Africa against Zimbabwe on July 5, 2003.

# The 170-run partnership is the highest shared by Dravid against England for any wicket, bettering the 169-run partnership for the fourth wicket at Chester-le-Street on July 4, 2002.

# Kohli’s knock is his joint second highest in ODIs – his highest is 118 against Australia at Visakhapatnam on October 20, 2010.

# Dhoni posted three consecutive fifties for the first time against England – 69 at The Oval, 78 not out at Lord’s and 50 not out at Cardiff.

# Ravindra Jadeja posted his fourth duck in ODIs – his first against England.

# Dhoni posted his sixth fifty against England – his 41st in ODIs.

# Rahul Dravid signed off his career in ODIs with a brilliant – 69 off 79 balls. His 83rd fifty in ODIs is his 11th against England.

# Cook’s fifty against India is his eighth in ODIs.

# Dhoni has got the Player of the series award for the fifth time in ODIs – his first against England.(PTI)