England vs Ireland: Stirling, Balbirnie Slam Centuries as Visitors Hunt Down 329 in Southampton

England vs Ireland: Stirling, Balbirnie Slam Centuries as Visitors Hunt Down 329 in Southampton

See the latest Ireland vs England 2020, 3rd ODI: Opener Paul Stirling (142) and captain Andrew Balbirnie (113) scored centuries as Ireland won with a a delivery to spare. 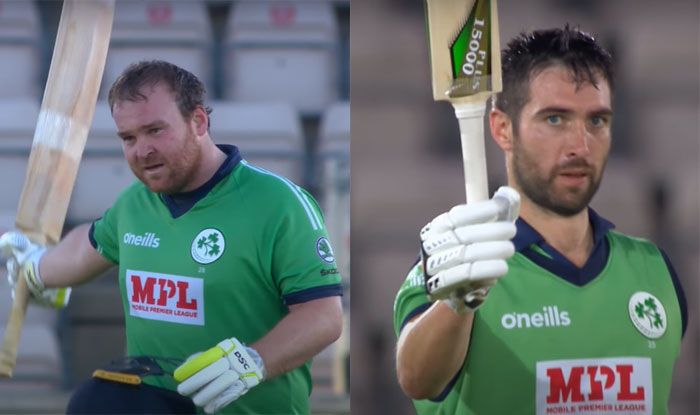 In a repeat of their 2011 World Cup exploits, Ireland hunted down 329 to win the third and final ODI of a three-match ODI series against England by seven wickets in Southampton on Tuesday. Their win was powered by some sublime batting performances from opener Paul Stirling (142) and captain Andrew Balbirnie (113) as they won with a a delivery to spare.

During a group match at the 2011 World Cup, Ireland had similarly chased down 329 with Kevin O’Brien hitting a famous century. O’Brien (21*) on Tuesday didn’t take the centrestage but he hit the winning run as his unbroken partnership of 50 runs with Harry Tector (29*) was also vital in avoiding a late hiccup.

Having already lost the series 2-0, Ireland were looking to finish on a high but were left with a stiff challenge after a century from another Irishman and England captain Eoin Morgan (106) propelled the hosts to 328-all out in 49.5 overs.

Ireland opted to bowl first and had removed the England top-three by the first delivery of the 9th over.

It was then that Morgan and Tom Banton, who scored a brisk half-century, counterattacked in a stand worth 146 runs for the fourth wicket to put England in control.

Morgan struck 15 fours and four sixes during his innings.

David Willey also scored a fifty, 51 off 42 as England set a daunting task for their opponents whose batting failures were the main reason for the losses in the opening two matches.

However, Ireland adopted a measured approach for the chase, laying a solid foundation in the first 10 overs during which they scored 55/1.

Striling and Balbirnie added 214 runs for the second wicket before being separated. Their departures in the space of 25 runs resulted in a late wobble but Tector and Brien held their nerves to take Ireland over the line. England vs Ireland: Paul Stirling Was Confident of His Team's Ability to Chase Down 329