Catch live steaming of the England vs Netherlands match here.

England face-off against Netherlands in the inconsequential Group 1 encounter of the ICC World t20 2014 at the Zahur Ahmed Chowdhury stadium in Chittagong on Monday. While both the teams are out of contention as far as the semi-final berth is concerned, yet they would like to end the tournament on a high as it is their last match of the ICC World T20.

England have had a rather poor tournament, with only Alex Hales getting some considerable runs under his belt. And apart from their win against Sri Lanka, they would like to forget the course of the rest of the tournament.

Netherlands, on the other hand, will be quite happy with their performances in this edition of the World T20. After registering the record-breaking win over Ireland in the qualifying stage to book a berth in the main draw, they gave South Africa a run for their money as they came close to causing the biggest upset of the tournament.

They would like to forget about the disastrous 39 all out against Sri Lanka, but overall, their batting has shown explosive traits. 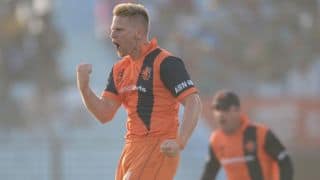