Hosts England take on 2015 ICC Cricket World Cup runners-up in the second of the five-match ODI series at The Oval in London on Friday. England, who are already a game up in the series would look to mak it two in a row, while New Zealand would like to strike back and level terms in order to prove themselves as the World Cup finalists. Live Scorecard: England vs New Zealand 2015, 2nd ODI at The Oval

The Oval pitch has traditionally been a dry and offers a lot of bounce for pacers, which should be an important point for the likes of Steven Finn (England) and Trent Boult (New Zealand) to note. Despite the bounce, as well as its support for swing, it has been a happy hunting ground for many a batsman, and as such has a lot of runs in store for the batting order. Live Updates: England vs New Zealand 2015, 2nd ODI at The Oval

Live streaming of the cricket matches is fast becoming a rage among the cricket fans. Those who are stuck in their workplaces, schools, colleges or at any remote locations where it is not possible for them to watch their favourite live cricket matches on television, take the help of live streaming. With the advancement of modern day technology, it is possible for everyone to watch live cricket matches on their laptops, mobile phones and even on the tabs that have good internet connection. However, people will have to be careful of the fraudulent links as it is possible that one might get directed to misleading content and objectionable websites. 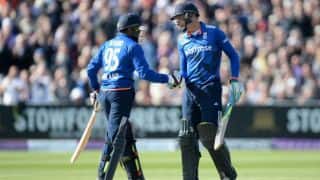