England are currently leading the series 1-0, after a massive 210-run victory in the first ODI at Edgbaston.

England and New Zealand face off in the second game of the five-match One-Day International (ODI) series at the Oval in London on Friday. England are currently leading the series 1-0, after a massive 210-run victory in the first ODI at Edgbaston.

The English camp will be an upbeat one at the moment, basking in the glory of a feat that many would have thought was very difficult to achieve for them, if not impossible. The England cricket team, which crashed out of the ICC Cricket World Cup 2015, handed an upsetting defeat to the runners-up of the same tournament, against whom they had suffered a one-sided eight wicket thrashing in February-March. Brendon McCullum lauds outstanding England’s performance against New Zealand in 1st ODI

Yet, this team was a different one from the one that lost miserably at Wellington. New Zealand started off with the upper hand in both innings, but it was ultimately a brilliant show by the hosts in all three departments that led to them tightening the noose around the Kiwis’ necks. AB de Villiers is my role-model, insists Jos Buttler

Among the hosts, the likes of Jos Buttler and Joe Root smashed record centuries, exceeding continuing their golden form with the bat and exceeding expectations harboured from them in the process. Adil Rasheed’s outstanding all-round performance, that played a vital role in England’s victory, was a pleasant surprise and could have been a strong candidate for the Man of the Match award in the first ODI. While there a few chinks among the hosts, especially Jason Roy’s dismissal off the first ball of the match, it was made up for brilliantly by a few individuals.

Debutant Sam Billings had a mediocre start to his international career, getting dismissed for 3 off 8 deliveries, giving his New Zealand counterpart Mitchell Santner his maiden wicket in his first ODI. Billings therefore has a slim chance of being selected for the second game. Skipper Eoin Morgan might likely give James Taylor a chance in his place, in order to boost his batting firepower and post higher totals.

New Zealand, on the other hand, will look to wake themselves up and get back to their destructive ways, which could also mean a couple of changes in the playing eleven for the upcoming encounter. Brendon McCullum, captain of the visiting camp, might be forced to bring in an all-rounder in the form of the destructive Corey Anderson in place of his brother Nathan, who was expensive as a bowler and was dismissed on 5. Another change that Brendon might announce at the toss would be Tim Southee in place of Mitchell McClenaghan, who conceded 93 runs from 10 overs, though he managed to take two wickets as well. Mike Hesson wants improved bowling attack from fast bowlers

The Oval pitch has traditionally been a dry and offers a lot of bounce for pacers, which should be an important point for the likes of Steven Finn (England) and Trent Boult (New Zealand) to note. Despite the bounce, as well as its support for swing, it has been a happy hunting ground for many a batsman, and as such has a lot of runs in store for the batting order. 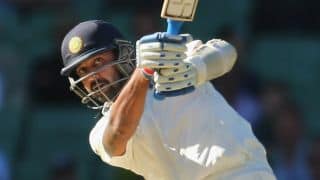 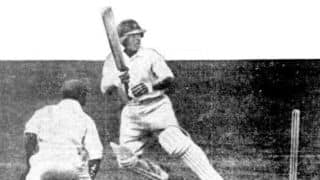