Hosts England take on New Zealand on Day 2 of the second and final Test at Headingley in Leeds on Saturday. New Zealand are currently battling at 297 for the loss of eight wickets. Live Updates: England vs New Zealand, 2nd Test, Day 2 at Headingley

Earlier, rain washed away the first session after which England won the toss and elected to bowl first on a cloudy morning. England were unchanged while New Zealand handed a Test debut to Luke Ronchi who replaced Corey Anderson.

With the advancement of modern day technology, it is possible for everyone to watch live cricket matches on their laptops, mobile phones and even on the tabs that have good internet connection. However, people will have to be careful of the fraudulent links as it is possible that one might get directed to misleading content and objectionable websites. Read: England on top as New Zealand score 297/8 at Stumps on Day 1 of 2nd Test at Headingley 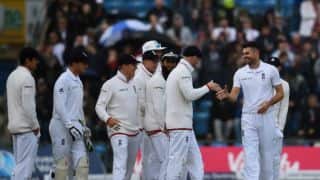