The left-handed Stokes clobbered 15 boundaries and three sixes to help England consolidate their position in the Test.

England will resume their second inning son 429 for six on the fifth and final day of their first Test against New Zealand, at Lord’s on Monday. England have an overall lead of 295 runs in the first of the tw0-Test series. LIVE CRICKET UPDATES: England vs New Zealand, 1st Test Day 5

England were powered by centuries from their captain Alastair Cook and Ben Stokes, as well as a from a brilliant knock by Joe Root, that they were able to negate the first-innings lead of New Zealand, which was of 134 runs.  READ: Alastair Cook finds his lost mojo

Cook batted throughout the fourth day, resuming his innings at 32 and remained unbeaten on 153 to notch up his 27th Test century. The England captain, who has received tremendous criticism from all ends in the past couple of seasons. In fact, one of England’s most successful batsman, Cook, has now scored two tons in consecutive Tests.  READ: England vs New Zealand, 1st Test at Lord’s: What lies ahead?

The highlight of the day was also Stokes’ rapid century, which came from just 92 balls. The left-handed Stokes clobbered 15 boundaries and three sixes to help England consolidate their position in the Test. 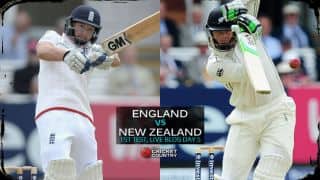 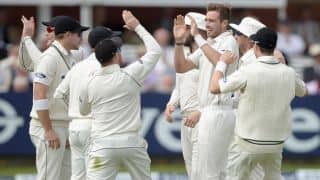