Officials will meet along with Ageas Bowl groundstaff at the end of the first day's play (Friday) and if the weather forecast is good for the following morning, they can start play half an hour earlier than normal.

Flexible start times are to be introduced for the third and final Test between England and Pakistan after bad light blighted the drawn second Test in Southampton, the England and Wales Cricket Board announced on Thursday (August 20)

Officials will meet along with Ageas Bowl groundstaff at the end of the first day’s play (Friday) and if the weather forecast is good for the following morning they can start play half an hour earlier than normal.

Previously any extra time was added to the end of the day’s scheduled play, only to go unfulfilled if conditions worsened.

Pakistan need to win the Test also at Southampton to tie the series.

This flexible approach — which had support from England captain Joe Root and head coach Chris Silverwood — may be extended to future series played in England.

Only 134.3 overs were sent down across five days in the second Test which was marred by rain delays as well as the spectacle of players being taken off the field for bad light even when the Ageas Bowl floodlights were in use.

Not since the same two teams met at Lord’s in 1987, when 112.5 overs were bowled, has a Test in England been so badly affected by weather interruptions.

“The ECB and the ICC have agreed to revised start times ahead of the #raisethebat third Test starting on Friday at the Ageas Bowl,” read an ECB statement.

“The flexible approach will enable the prospect of making up time for inclement weather during the morning session of subsequent days rather than at the end of the day.”

The onus will be on the match officials to keep a constant eye on the light.

The umpires in the second Test Richard Kettleborough and Michael Gough were widely criticised for their strict interpretation of the light regulations.

“The match officials will ensure that light is monitored to maximise playing time while it is still safe to do so,” read the statement.

“The safety of the players is still the number one priority for this protocol.” 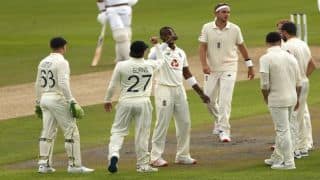