Jofra Archer bowled four brilliant overs in the 1st ODI and he will be the focus again for England at Southampton.

Only 19 overs of play was possible but of those, and even though Pakistan had scored 80 for 2 on a rain-truncated afternoon at the Oval, four of those overs proved were the most beneficial for England as everyone saw first hand just what Jofra Archer is capable of. After the game was reduced to a 41-overs-a-side contest, Archer, 23, sent down 24 fiery deliveries and finished with 1 for 6, including two maidens, taking a step closer to what could be a dream World Cup berth.

On a damp day, England and Pakistan were robbed of the possibility of what could have proved to be a belter of a contest. But the good news heading into the second game is that although the conditions are overcast, the chances of rain are bare minimum or next to none. Hence, expect a full game with some riveting contest from both teams.

By whatever little was seen on Tuesday should be positive indications for Pakistan with the form of Imam Ul Haq sending out positive vibes to the dressing room. Against the movement in overcast conditions, the Pakistan opener fought hard to score 42 off 68 with five boundaries during his knock, and although the run-rate wasn’t the most promising, the left-hander showed he is willing to grit it out there.

For England, of those 19 overs, barring Archer’s ruthless spell, Liam Plunkett and Chris Woakes bowled proving lines at first, but just when they seemed to be settling into their rhythm, the rain gods laid waste to those plans. Saturday should lay the blueprint for the remaining three games for both sides, and also, most likely, the World Cup.

What: England vs Pakistan, 2nd ODI

At the Oval, England went all in with their core players – Jonny Bairstow, Moeen Ali, Jos Buttler and Ben Stokes – and giving them a chance to get back to the international drill after the rigorous IPL. They didn’t get a chance in London but are expected to get back to business at the hard Rose Bowl deck. With Archer, Denly and Woakes, England have a long tail. Hence, expect no changes.

Shoaib Malik, having missed the first game due to personal reasons is expected to be back in time for this encounter and is likely to replace Asif Ali in the Playing XI. 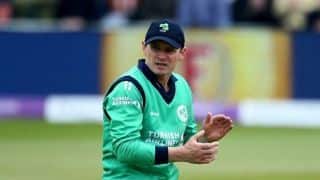