England left out rising star Jofra Archer as they made some changes for the second one-day international against Pakistan.

England left out rising star Jofra Archer as they made some changes for the second one-day international against Pakistan at Southampton on Saturday. Team officials had always planned that this five-match series would act as a final audition for places in tournament hosts England’s 15-man squad for the World Cup, which starts later this month. (ALSO READ: England vs Pakistan, 2nd ODI Scorecard)

To that end, they made three changes to their side following Wednesday’s rain-affected no-result which saw just 19 overs bowled at The Oval. Left-arm quick David Willey came in for Archer, fit-again opener Jason Roy returned in place of James Vince – left out on his Hampshire home ground – and Moeen Ali was recalled in place of fellow spinner Joe Denly for this day game.

Meanwhile left-arm quick Mohammad Amir, left out of his country’s provisional World Cup squad but named in the side that played at The Oval, was reportedly suffering from a viral infection with his place taken by spinner Yasir Shah.

Pakistan captain Sarfraz Ahmed won the toss and elected to bowl first on Saturday. “It looks like a good batting pitch and we want to try and bowl first and take early wickets,” he said . “We know it’s going to be a high scoring game so we have to be positive. We’re hoping we can restrict them to 270-280 and chase the target.”

Meanwhile England captain Eoin Morgan said: “It looks a very good, fresh pitch. We like playing here – we have some good memories, and always get some fantastic support.” 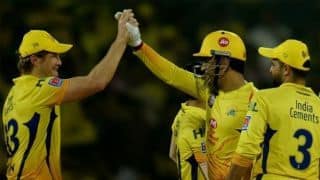 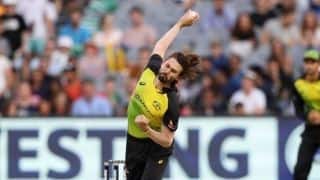