One one can expect a keen contest between England and Pakistan.

PAK 205/7 | Overs 49.1
Amad 26*, Zafar 37*
What a sensational victory for Paistan! Amad Butt lofts Winslade over the infield for a boundary to help Pakistan reach the final.
PAK 193/7 | Overs 48
Amad 21*, Zafar 32*
Fair bit of drama here. Amad Butt lofts Rob Sayer, Jack Winslade settles underneath the ball, catches it, the ball pops out of his hand and lands behind the ropes. Six runs for Pakistan. 11 runs from the over. 12 needed in 12 balls.
PAK 182/7 | Overs 47
Amad 13*, Zafar 29*
Excellent all-round cricket. Skipper Rhodes bowls accurately giving away just three. It could well have been a boundary on the last ball when Gohar guided it past keeper, but Clarke behind the wickets got a hand to it.
PAK 179/7 | Overs 46
Amad 12*, Zafar 27*
Finally a good over for Pakistan. 10 runs from that Jack Winslade over. 26 needed in the last four overs.
PAK 169/7 | Overs 45
Amad 10*, Zafar 19*
England are tightening the noose here. Another good over by skipper Rhodes. Just two runs coming from it. 36 needed in five overs.
PAK 167/7 | Overs 44
Amad 9*, Zafar 18*
The required rate has gone beyond run-a-ball for the first time. 38 needed in 36 balls. A tight over delivered by Rob Sayer giving away just three.
PAK 164/7 | Overs 43
Amad 8*, Zafar 16*
Jones completes his spell and he seems to have delivered a crucial two overs towards he end. After conceding one in his penultimate over, he gives away just three runs. The equation is now 41 runs in 42 balls.
PAK 154/7 | Overs 41
Amad 4*, Zafar 10*
Excellent bowling from Robert Jones. Concedes just one run in the 41st over. Pakistan need 51 runs in nine overs.
PAK 153/7 | Overs 40
Amad 4*, Zafar 9*
Amad Butt has been good in his defense, but the pressure is evident on the face of the Pakistani batsmen. Amad releases some pressure with a boundary lofting over the infield off Fisher. Gutsy batting from Amad. 52 runs needed in last 10 overs.
PAK 142/7 | Overs 37
Amad 0*, Zafar 2*
The gamble to bring back Fisher has worked. Once again he sets up the batsman and Shakeel despite being there for a long time falls into the trap and is caught behind. Pakistan need 63 runs in 13 overs.
OUT! Shakeel 45(61)
PAK 133/6 | Overs 33
Shakeel 38*
Short ball does the trick. Saifullah tries to play at a well-directed short ball from Fisher and is caught behind by keeper Clarke. Once again England getting wickets in quick succession. Pakistan in a precarious situation now.
OUT! Saifullah 0(4)
PAK 131/5 | Overs 32
Shakeel 37*
Disastrous shot from Hamza. Rob Sayer once again gets a wicket off the fuller ball. Hamza tries to sweep at it and is caught plumb in front.
OUT! Hamza 35(52)
PAK 122/4 | Overs 30
Hamza 33*. Shakeel 30*
The momentum is slowly shifting in favour of Pakistan. Shakeel and Hamza have done an excellent job of not allowing the required rate to rise. They have also brought up their fifty partnership.
PAK 96/4 | Overs 26
Hamza 18*. Shakeel 19*
Required rate still around four runs an over. So not much pressure on Pakistan, but preserving the wickets will be key here. Shakeel and Hamza have done a decent job collecting the singles and twos.
PAK 75/4 | Overs 20
Hamza 5*. Shakeel 11*
Some sort of recovery from Shakeel and Hamza but there’s a long way to go. leggie Jones is still bowling a tight line.
PAK 58/4 | Overs 15
Hamza 1*. Shakeel 0*
Disastrous shots from the Pakistan batsmen. Will Rhodes is elated after Hasan Raza plays a casual drive to give a simple catch to Rob Sayer at mid-off. In the next over, leg-spinner Robert Jones strikes with the key wicket of Imam-ul-Haq out leg-before. Kamran Ghulam plays a reckless pull shot straight to midwicket.
OUT! Hasan 8(16), Imam 28(43), Ghulam 0(3)
PAK 56/1 | Overs 13
Imam 27*. Raza 8*
Despite the pain, Imam-ul-Haq has taken the attack to England playing some aggressive shots and hobbling along playing some shots in the outfield.
PAK 42/1 | Overs 8
Imam 20*. Raza 1*
Aslam tries to be too enterprising. He tries to sweep a fuller delivery from off-spinner Rob Sayer nad is caught plumb in front. The umpire has not hesitation in giving that out. Key wicket for England. Meanwhile news about Imam is that, the physios have allowed him to play despite a hamstring injury but the opener will undergo scans and his injury will be assessed after the match.
OUT! Aslam 18(26)
PAK 27/0 | Overs 6
Aslam 8*, Imam 18*
Imam-ul-Haq is still limping but that doesn’t deter him from attacking. He lofts Winslade over the infield and then plays some cheeky shots for boundaries. Sami Aslam finishes off the sixth over with a pull shot opver mid-wicket for four. 16 runs comes from that Winslade over.
PAK 0/0 | Overs 2
Aslam 0*, Imam 0*
Identical start for Pakistan. The first two overs are maiden. Disciplined start by Matthew Fisher and Jack Winslade.
ENG 204/7 | Overs 50
Rhodes 76*, Sayer 18*
A captain’s knock from Will Rhodes. His fighting half-century has helped recover from early wickets and slow start to reach a respectable score. Rob Sayer smacks a huge six in the last over by Zia-ul-Haq, Rhodes takes the team past 200 with a boundary and three runs. They complete the fifty-run partnership in 31 balls with a single on the last ball of the innings.
ENG 154/7 | Overs 45
Rhodes 45*, Sayer 0*
After two short balls, Amad Butt bowls it full and straight, Robert Jones misses it and is castled. Jones had earlier pulled a short ball from Butt for boundary.
OUT! Jones 17(27)
ENG 149/6 | Overs 44
Rhodes 44*, Jones 13*
The spinners have done an exceptional job in containing the batsmen. Despite being settled, skipper Will Rhodes is finding it difficult to hit the big shots.

Watching the #under19WC Come on Pakistan! Some good talent there. Impressed with Zia Ul Huq’s bowling.

ENG 119/6 | Overs 38
Rhodes 30*, Jones 0*
Karamat Ali bags two wickets in two balls. Higgins tries to break the shackles and steps down the track. Fails to read the turn of the delivery and is stumped. Joe Clarke who played a crucial 42 in the quarterfinals is done in by a googly and is bowled.
OUT! Higgins 52(99), Clarke 0(1)
ENG 110/4 | Overs 35
Higgins 51*, Rhodes 22*
A fighting half-century from Ryan Higgins. The runs are still not flowing for England. Zia-ul-Haq is back into the attack. The spinners have done a good job and the pacers trying to build on the pressure. Even the pacers are using the slower ones so that it becomes difficult to hit.
ENG 99/4 | Overs 32
Higgins 48*, Rhodes 15
The spinners have kept the run-rate in check. Ryan Higgins is inching closer to his half-century. Rhodes is trying to rotate the strike and give it to the well-set Higgins. England will have to increase their scoring rate to challenge Pakistan later on. They got a boundary in the 28th over, their first after 98 balls!
ENG 80/4 | Overs 27
Higgins 41*, Rhodes 3*
The spinners have got good purchase from the wicket. In the 27th over, Rhodes was almost run-out. Higgins defensively pushed back to the bowler. Karamat Ali didn’t collect the ball cleanly. Higgins set off for a single but Rhodes was late to react, somehow Zahar Gohar’s throw was slightly wayward and Rhodes survives.
ENG 69/4 | Overs 22
Higgins 33*, Rhodes 0*
Barnard goes on the backfoot to cut a wide one from Kamran Ghulam. Instead he gets a bottom edge and the ball crashes into the stumps. Fourth wicket down for England. The pitch is slow and there’s not much bounce. Barnard could have done well playing the ball straight.
OUT! Barnard 13(32)
ENG 61/3 | Overs 19
Higgins 29*, Barnard 9*
At drinks, England have fought back through Barnard and Higgins. The spinners have not let the batsmen run away but England have done well to pick up the singles and twos.
ENG 51/3 | Overs 15
Higgins 25*, Barnard 2*
Zafar Gohar and Karamat Ali bowling in tandem. Higgins has started off well and looks settled to anchor the innings now. Any more wickets will push England further back.
ENG 38/3 | Overs 11
Higgins 15*
Big wicket for Pakistan. The in-form Duckett is caught brilliantly by Hasan Raza diving to his right at short mid-wicket. The pitch has not done much but the England batsmen have been reckless with their shots.
OUT! Duckett 22(30)
ENG 24/2 | Overs 9
Duckett 13*, Higgins 10*
Duckett and Higgins have moved into double figures but England have put themselves in trouble early on. On expected lines, the two quick wickets has slowed the scoring. The bowlers have delivered well but the batsmen are making this wicket more difficult than it is. Both the batsmen have struggled to time the ball well.
ENG 4/2 | Overs 4
Duckett 2*, Higgins 1*
Once again, the team batting first finds itself in trouble. Zia bowls at a probing line and beats Tattersall on four occasions before getting him caught at backward point. Meanwhile, England lose Finch for a duck as well caught driving off Amad’s delivery. The short cover was deliberately placed and the ploy succeeds.
OUT! Tattersall 0(11), Finch 0(7)
ENG 0/0 | Overs 2
Tattersall 0*, Finch 0*
Two maidens to start off the smei-final. Both Tattersall and Finch have not been given any width to score easy runs. Zia-ul-Haq and Amad Butt started off the proceedings.

Toss: England skipper Will Rhodes has won the toss and elected to bat in the first semi-final

Both teams have retained their playing XI from the quarterfinal.

Hello and welcome to the live coverage of the ICC Under-19 World Cup semi-final between England and Pakistan at Dubai. I am Abhijit Banare and I will be bringing you the live updates of the match. England performed exceedingly well in the quarterfinal to defeat India. They bowled incisively and chased down the modest target in a close contest.

On the other hand, Pakistan Under-19 team won two of their matches in the group stages of the tournament. They won their quarter-final against Sri Lanka convincingly. In recent past, Pakistan have held the edge in encounters against England. However, one expects England to put up a good show in the game. 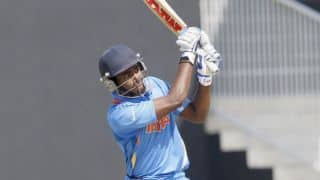