This was Alex Hales' first hundred in England vs South Africa 2015-16 ODI series.

Alex Hales has smashed a gorgeous century in South Africa vs England 2015-16, 5th ODI at Newlands, Capetown today. Hales struck a lot of boundaries in his innings, getting almost half the runs through it. When Hales reached 89 he had already hit 11 fours. He hit one more four batting on 94 and took his score to 98. He then took a single and got to 99, played a few dot balls and finally hit a boundary to get to his century. However, he did not get enough support from other batsmen with his opening partner Jason Roy getting out for only eight runs. This was his second century ODI century and first in the current series. Joe Root, who came one-down was not able to convert his start into a big score and got out for 27. Eoin Morgan was then dismissed for two. Kagiso Rabada then cleaned up Ben Stokes and Joss Buttler. England captain Morgan had won the toss and elected to bat first. LIVE CRICKET SCORECARD: South Africa vs England, 5th ODI match at Cape Town

At the time of reporting, England were 210  for the loss of eight wickets at the end of 39.3 overs. Hales’ ODI record is not particularly spectacular as he averages only 31.48 from 28 ODIs. Hales had narrowly missed out on a hundred when he was dismissed for 99 in the second game of this series played at Port Elizabeth on February 9, 2016. He has been in excellent form throughout this series. He scored 57 runs in the first match and made 65 and 50 in the third and fourth one-day matches as well. Hales’ consistent performance in the series has helped England immensely. 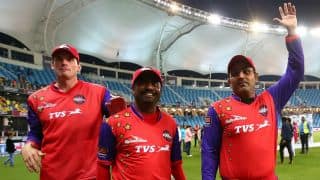