The third ODI at the Mecca of cricket, Lord’s, will act as a final chance for England and South Africa to experiment with their team combinations.

South Africa would rue the fact that they could not get 7 runs from 6 balls against England in the second One-Day International (ODI) at Southampton. David Miller and Chris Morris succumbed to the brilliance of Mark Wood, enabling England to win the tie by a mere 2 runs and gain an unassailable 2-0 series lead. The third ODI at the Mecca of cricket, Lord’s, will act as a final chance for England to experiment with their team combination. South Africa, on the other hand, will want to end the series on a high ahead of ICC Champions Trophy 2017. FULL CRICKET SCORECARD, England vs South Africa – 3rd ODI

Lord’s has been a happy hunting ground for England against South Africa, having won all their three-encounters. England will look to make full use of the match with a series win already in their kitty. With Ben Stokes still struggling with his knee-injury and Chris Woakes nursing a quad-pull, England management would be biting their finger-nails. Morgan will want to give the  bench-warmer like Sam Billings, David Willey and Jonny Bairstow a chance in the XI. In a surprise move late evening, England management decided to call upon Steven Finn, Toby Roland-Jones and Liam Dawson in place of Stokes, Woakes and Moeen who were given rest ahead of the CT 2017.

South Africa on the flipside will be eager to erase the horror of Southampton and head into CT 2017 with high hopes and aspirations. As said by AB de Villiers at the toss, Morne Morkel will be back for them. South Africa would definitely replace Farhaan Behardien and bring in JP Duminy.

Keshav Maharaj’s place in the XI is doubtful after a poor show in second ODI. South Africa will want to give Kagiso Rabada, Wayne Parnell and Morne another go. With the likes of David Miller, Quinton de Kock and Faf du Plessis returning to form, South Africa will have hopes pinned on them to take them beyond ODI supremacy in CT 2017.

There was much controversy over the ball-tampering incident at Southampton that saw de Villiers having a long discussion with the on-field umpires. “The umpires felt the condition of the ball changed, in a way, making me feel that we are responsible. I was quite upset about that. I don’t know what else I can say, I was pretty upset. It’s done and dusted now, nothing happened, there were no fines given or anything like that,” said de Villers.

Even Morgan had his views over the incident, “Normally, if there’s any dispute about the ball, they change it straight away.” 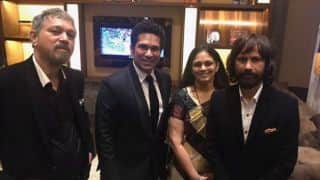