(England clash with South Africa in the ICC World T20 2014 at Chittagong on March 29. Catch Live Cricket Score of the match in our updates below).

Parnell varying his length wonderfully well for South Africa. You yet again wonder has Dernbach lost the game for England. How can Dernbach be better than James Anderson even in T20Is? Bopara though just about keeps England in the game with two boundaries.

England 152/5 overs 17
R Bopara 15(11), C Jordan 10(8)
This is turning into a damp squib for England. Where are the fours and sixes? Maybe Bopara heard it as a top edge gets him a boundary over third-man.
England 142/5 overs 16
R Bopara 9(8), C Jordan 7(5)
England need some towering sixes here otherwise it will be a case of 11 forlorn faces at the end of the match. The left-armer’s angle of Parnell making it more of a problem for them. Having a left-arm quick in T20Is is like gold dust.
England 133/5 overs 15
R Bopara 6(5), C Jordan 1(1)
Tahir getting it to skid off the surface again. He is bowling from around the wicket. A fine strategy that. It works for him as Buttler tries a reverse sweep and loses his wicket. Well done to De Villiers and Tahir for working out a fine strategy.
OUT! J Buttler 34(24)
England 128/4 overs 14
J Buttler 34(22), R Bopara 3(3)
When Buttler plays even those mishits keeps going for boundaries. However Hendricks from around gets it to tuck both batsmen before Buttler smashes him for a six.
England 111/4 overs 13
J Buttler 20(17), R Bopara 2(2)
Tahir skids off the surface yet again to get a wicket off Morgan.
OUT! E Morgan 14(14)
England 105/3 overs 12
E Morgan 14(13), J Buttler 16(14)
The rifle totting gazelle Steyn back into the attack. He isn’t yet zipping through the crease. Maybe he is worried by the slippery conditions.
England 99/3 overs 11
E Morgan 10(9), J Buttler 14(12)
Imran Tahir with his skiddy wrong uns looking good. These conditions do help him.
England 92/3 overs 10
E Morgan 9(8), J Buttler 8(7)
Eoin Morgan trying to find gaps with chronometric precision. But South African seamers are bowling wide of off-stump to him.
England 84/3 overs 9
E Morgan 7(6), J Buttler 3(3)
England need a partnership here. The ball is getting changed due to dew conditions.
England 75/3 overs 8
E Morgan 1(2), J Buttler 1(1)
The dew factor coming into play here. A score of 197 seems like 157 in these conditions.Hales though is out. Now that wicket may turn the tables. He is followed to the pavilion by Moeen Ali too. Parnell on a hat-trick but he doesn’t get it.
OUT! A Hales 38(22), OUT! M Ali 10(10)
England 71/1 overs 7
A Hales 38(21), M Ali 10(8)
Tahir into the attack. He straightaway bowls a googly. The young Moeen though uses Asian wrists to essay a boundary through third-man.
England 62/1 overs 6
A Hales 37(20), M Ali 2(3)
Hendricks into the attack. He hits back of a length stuff straightaway. The Halestorm though continues to be fire as he helps it on the way for a boundary. Another boundary that leaves fielders in a state of trance. He ends the over with a cracking shot over mid-wicket for six. This is some poor stuff from the left-armer, Hendricks.
England 47/1 overs 5
A Hales 22(14) M Ali 1(2)
Lumb who has built his game on power starts with a boundary. The power-packed player though gets out caught brilliantly by David Miller. An unbelievable catch taken at short cover!
OUT! M Lumb 18(14)
England 40/0 overs 4
A Hales 22(14), Lumb 14(11)
Dale Steyn, the gazelle into the attack. The tall Notts player Hales doing what he does best in County cricket. With a high back lift play power packed shots. He may have been run out though but Hales gets back in. Along with getting back to the crease he smashes the stumps too! His partner Lumb ends the overs with a six.
England 29/0 overs 3
A Hales 19(11), M Lumb 7(7)
Lumb joins the party with a scorching six as well.

You have just witnessed a genius in action… @ABdeVilliers17 is a freak.. Some of those shots were outrageous.. Best in the world.. #fact

England 22/0 overs 2
A Hales 19(10), M Lumb 0(2)
Albie Morkel opening the bowling. Well you expected Dale Steyn to open the bowling. Drama galore! Hales gets out but it is called as no ball. Believe-it-or-not that wasn’t a no ball. To make it worse for South Africa Hales gets away a boundary.
England 9/0 over 1
A Hales 9(6), M Lumb 0(0)
South Africa start with spin of Duminy against Lumb. A good idea as even a decade or so ago when Lumb came into County cricket he was never said to be good against spin. His partner Hales is struggling against spin as well. He finally gets one boundary away.
South Africa 196/5 overs 20
de Villiers 69(28)
Now in the last over De Villiers showcased that he has been bestowed with god-gifted eye as he changes hand to play through third-man for a boundary. In the final over against Bresnan then he crosses over towards off-stump to cross-bat a six. That shot bordered on the outer limits of sheer arrogance. To make it worse Moeen Ali drops a catch of him the next ball! A Morkel though, is out of the last ball as South Africa make 196/5.
OUT! A Morkel 3(3)
South Africa 182/4 overs 19
de Villiers 58(25)
The young Jordan into the attack. He too seems to have pressed the panic button by bowling full. Now you don’t bowl full-tosses to Miller and he sends it deep into the orbit with his bazooka bat for one crackerjack six. Miller though gets out and he would disappointed as he lost his wicket to a full toss
OUT! D Miller 19(15)
South Africa 167/3 overs 18
de Villiers 50(23), D Miller 13(11)
England’s match winner err for the opposition Dernbach into the attack. He straightaway tries to bowl full and gets clambered for boundaries. Another fuller one and De Villiers smashes a six as well.When will Dernbach bowl a stock delivery?
South Africa 141/3 overs 17
de Villiers 36(19), D Miller 4(8)
De Villiers in sheer frustration tries to thump it over covers but only finds the toe end of the bat. England continuing with the strategy of bowling short of a length. De Villiers finally gets one in the middle of the bat to smash a boundary.
South Africa 128/3 overs 16
de Villiers 25(15), D Miller 3(6)
De Villiers needs to get more strike here. South Africa have to get a good score as the dew will hurt their bowlers when they bowl. England just keeping it tight. They are bowling back of a length. A clever strategy on a track with so much dew around.
South Africa 121/3 overs 15
de Villiers 20(12), D Miller 1(3)
Unfortunate run-out there as Duminy gets out. Borad has six fielders inside the circle. England are clawing their way back into the game.
OUT! Duminy 5(5)
South Africa 116/2 overs 14
de Villiers 20(12), JP Duminy 2(2)
de Villiers is in resplendent touch for South Africa.
South Africa 108/2 overs 13
de Villiers 13(7)
De Kock too gets out. AB de Villiers though is playing fine shots.
OUT! Kock 29(33)
South Africa 97/1 overs 12
AB de Villiers in the new batsman. Bopara has changed the angle to bowl from around the wicket to left-hander, de Kock.
South Africa 90/1 overs 11
de Kock 25(29)
The magician Amla is out. He tries to hoick Broad over the on-side but gets caught in the deep with Hales taking a fine catch.
OUT! H Amla 57(37)

Not sure why we have a light issue when England’s kit was designed to glow in the dark. #ENGvSA

Hello and welcome to the live updates of this Group 1 Super 10s clash in the ICC World T20 2014 between England and South Africa at the Zahur Ahmed Chowdhury Stadium in Chittagong. England will be buoyed by Alex Hales’s brilliant ton that led the poms to an improbable win against Sri Lanka. South Africa on the other hand suffered a scare against the onslaught of Netherlands and a repeat of that performance would see them crash out of the tournament. England, too are an highly enigmatic bunch and this match should make for compelling viewing. I am Bharat Ramaraj and will be bringing you all the live updates. 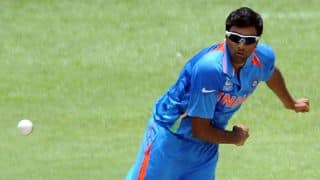 Ravichandran Ashwin: Wanted to bowl in full-sleeves shirt to see what advantage off-spinners get