South Africa have been in good from leading up to the ICC World T20 2016.

South Africa take on England in Match 18 of the ICC World T20 2016 at Wankhede Stadium, Mumbai. The two teams have recently competed in a T20I series that South Africa won 2-0. This will be South Africa’s first match of the tournament. England, on the other hand, lost their opening match against West Indies by 6 wickets. England will want to bounce back after their loss as soon as possible, while South Africa will want to get their campaign off to a winning start. England could not restrict West Indies despite scoring 182 in their first innings. Chris Gayle’s century made the run-chase look ridiculously easy. Full Scorecard: South Africa vs England, ICC World T20 2016, Match 18 at Mumbai

South Africa will be beaming with confidence after their win in the two warm-up matches. They beat India in a closely fought match and followed it up with a win against Mumbai Cricket Association (MCA) XI. All their batsmen and bowlers had good workouts and should have acclimatised with the conditions by now. Unlike a few other pitches, the pitch at Wankhede provides a bit of assistance to the quick bowlers.

South Africa will surely play Imran Tahir in their playing XI, but will take a call whether to include Aaron Phangiso based on the conditions. Their batting looks settled with the likes of Hashim Amla, Quinton de Kock, AB de Villiers and Faf du Plessis occupying the top four spots. Their lower-order too has a lot of firepower (Chris Morris being the latest addition to the arsenal) and the depth in their batting could eventually prove to be crucial in the tournament.

England’s bowling is a major worry. Each of David Willey, Reece Topley, Ben Stokes and Adil Rashid went for 10 an over against West Indies, which did not help their cause. Chris Jordan was the pick of the bowlers for England, finishing with 4 for 24 from 4 overs. Topley did not look settled throughout the match and it might be a good idea to bring in Liam Plunkett in his place. If England feel the need to play an extra spinner, they can always go to Liam Dawson, who was a surprise pick in the squad.

A loss for England will be a major setback in their bid to make it to the semi-final. England crashed out in the group stages in ICC World Cup 2015, and will not want history to repeat itself. South Africa, on the other hand, have all the momentum going into this match and will look to ease past England once again. 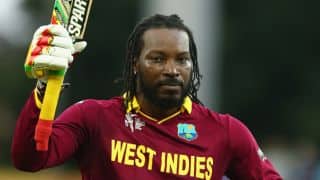