Check out Live Updates of Day 2 of the 1st Test between England and Sri Lanka here.

Sri Lanka 1401 I Overs 40
K Silva 62(141), K Sangakkara 32(61)
And that’s the end of the day then. After the early dismissal of Karunaratne, Sri Lanka have recovered well with the unbeaten partnership between Kaushal Silva and Kumar Sangakkara. Silva has looked very composed in the middle for his 62 not out. Sangakkara has looked himself. England will be worried by the fact that their bowling attack has looked a bit unidimensional. It will be interesting to see what tactics Cook employs in the morning session tomorrow.
Sri Lanka 126/1 I Overs 35
K Silva 53(115), K Sangakkara 27(57)
Both Silva and Sangakkara seem to be in the mood to see off this day without losing another wicket. They are happy to leave anything outside the off-stump. Even the English players seem to have lost the spring in their steps. And now edged and four. That four between the slips brings up Silva’s fifty. He will be proud of this knock so far. But the visitors would want him to continue from here on.
Sri Lanka 98/1 I Overs 29
K Silva 39(99), K Sangakkara 18(37)
Tough one there and Silva survives. Stuart Broad came back to bowl. This was pitched up and moving away from the corridor of uncertainty. Silva prodded at it, and the edge was collected by Prior. The keeper started celebrating but the replays showed it was just brushing past a few blades of grass before going in to Prior’s gloves. Hint of reverse swing also visible.
Sri Lanka 92/1 I Overs 25
K Silva 34(83), K Sangakkara 17(29)
Sri Lanka’s real threat was pacers with the new ball. But they have dealt with it successfully. Silva has continued his good run from the tour match. Sangakkara as always has been reliable. The odd short balls have posed some troubles for Silva but otherwise he has been composed in his innings.
Sri Lanka 86/1 I Overs 13
K Silva 31(63), K Sangakkara 15(19)
Liam Plunkett and Chris Jordan are bowling from either ends. Sangakkara has looked at ease and has been fed with a few legside deliveries. Silva looking solid on 31. STill a long way to go.
Sri Lanka 58/1 I Overs 13
K Silva 16(37), K Sangakkara 4(3)
Excellent start for Chris Jordan on debut, gets a wicket in his first over. Pitched it up, Karunaratne went for drive and Prior collected the edge safely behind the wicket.
OUT! D Karunaratne c Prior b Jordan
Sri Lanka 43/0 I Overs 11
D Karunaratne 27(31), K Silva 16(35)
England pacers are bowling well, but the openers have looked composed so far after the tea break. Not much swing on offer. So one less reason to worry for the batsmen for now. Anderson has been accurate but yet to get his rewards.
Sri Lanka 35/0 I Overs 7
D Karunaratne 19(20), K Silva 16(22)
Tea on Day 2: Sri Lanka have done well to keep their wickets intact. Huge task ahead trailing by 530 runs.
Sri Lanka 31/0 I Overs 6
D Karunaratne 19(20), K Silva 12(16)
Been a good start for Lanka. The aim will now to remain unscathed till tea. Both batsmen have managed to play well to the swing from Anderson and Broad.
Sri Lanka 6/0 I Overs 1
D Karunaratne 5(4), K Silva 1(2)
Sri Lanka are having some good fortune with the reviews. This one from James Anderson coming in over the wicket pitched just in line of leg stump and hits high on the knee roll. Umpire raised the finger but reviews showed the ball was going well over the stumps. Karunaratne survives.
England 575/9 I Overs 130.3
J Root 200(298), L Anderson 9(15)
England declared their innings at 575 for 9. Joe Root went onto score a double ton for England. He became the fourth youngest Englishman to do.
England 555/9 I Overs 128
J Root 183(285), J Anderson 5(7)
Plunkett was dismissed in the 126th over. He miscued a pull short and was caught by Kaushal Silva. Root is eying his double ton now but can Anderson block the balls till that time. Survived a close leg-before call. It was reviewed but got the left-hander’s advantage as it showed the ball pitched outside leg.
OUT! L Plunkett c Silva b Pradeep 39(42)

Joe Root 2nd Englishman after Len Hutton to register two scores of 180+ before the age of 24 years! #EngvSL

England 543/8 I Overs 124
J Root 178(278), L Plunkett 38(38)
Plunkett getting a few runs under his belt.Looks composed with his batting skills. With no declaration in sight, Root might as well get a chance to score his double ton at Lord’s/
England 503/8 I Overs 118
J Root 163(261), L Plunkett 15(18)
500 up for England. They were 209 for five last afternoon. Brilliant batting from Joe Root. Meanwhile, Sri Lankan bowlers have been conceding runs down the leg-side since lunch.
England 484/8 I Overs 114
J Root 154(249), L Plunkett 6(6)
Lankan team seems to have had a heavy lunch. Sloppy fielding in the first over post break. Six byes conceded by Kaushal Silva.
England 473/8 I Overs 113
J Root 152(246), L Plunkett 2(3)
LUNCH on Day 2: Root brings up his 150 at the stroke of lunch. England have progressed at over five an over since morning. That 47-run cameo from Broad has put England firmly in control of the proceedings.
England 468/8 I Overs 112
J Root 147(240), L Plunkett 2(3)
Broad’s joyride comes to an end. A touch short from Pradeep and he swings it straight to deep midwicket, Karunaratne takes a comfortable catch. Dropped: Plunkett pulled this straight to Eranga at short midwicket and the ball popped out of his hands. The fielder took it casually.
OUT! S Broad c Karunaratne b Pradeep 47(38)

Should Broad have gone? Bumble thinks so. What do you think? #EngvSL pic.twitter.com/qr9idaAo35

England 463/7 I Overs 111
J Root 144(238), S Broad 47(37)
Stuart Broad survives. He went fora defensive push and misses. Prasanna Jayawradene whipped off the bails in a flash. Replays showed Broad’s boot was just about hovering on the crease. After looking at it for a long time, the third umpire gave the benefit of doubt to Broad.
England 456/7 I Overs 108
J Root 140(231), S Broad 44(26)
England are racing now and Stuart Broad is playing a nice cameo. Inching closer to his fifty in quicktime. They have already stitched a fifty-run stand.

My word, Warney sounds like he had a few last night!

England 402/7 I Overs 102
J Root 131(221)
Jordan’s cameo comes ton an end. He started off his scoring running four. And in this over, he survived as Nuwan Pradeep misjudged a catch at deep fine-leg. This time around, Jordan tried to defend but ended up giving an easy catch to the keeper.
OUT! C Jordan P Jayawardene b Eranga 19(19)
England 380/6 I Overs 98
J Root 128(216)
Gone! the short ball trick has worked for the Lankans. It was yet another short one and Prior tries to fend it off awkwardly, the ball balloons in the air and Kaushal Silva at forward shortleg took a comfortable catch. Prior is furious at himself was falling to that. Nevertheless a breakthrough for the Lankans. Debutant Chris Jordan is the new man in. (STAT: Prior is the third England wicketkeeper to cross the 4,000-run mark in Tests)
OUT! M Prior c Silva b Eranga 86(131)

Matt Prior now the 8th batsman to aggregate 4000 Test runs as keeper! Third Englishman to do so after Knott and Stewart #EngvSL

England 375/5 I Overs 97
J Root 123(214), Prior 86(127)
Pradeep who can bowl with a big heart continued to extract something out of the track. He got one to hurry on Root and an inside edge from Root just about missed the stumps. He also produced an edge only for it to drop short of the slip fielder. England on the other hand continue to build on their first day’s score. It was during the 96th over of the game when Root came forward and showed that he is working hard on his game.
England 358/5 I Overs 93
J Root 113(202), Prior 79(115)
England started the second day on a sedate note. Both Matt Prior and Joe Root looked to get themselves on the second day. Only when Sri Lankan bowlers drifted on Root’s pads did he bring out his flick shot. Eranga then dug one short and extracted something out of the track. Root got surprised by it and top edged it. But Silva deputising for the injured Prasanna Jayawardene couldn’t take a very sharp chance. It can be counted though as a chance only technically.

At the end of first day’s play of the Test match played between England and Sri Lanka at Lord’s, the home team have made 344 for the loss of five wickets. It was Joe Root, who made a fine century and held the innings together by showing good defence. Once set, he looked to come forward and that helped him to keep Sri Lanka’s pacers, who were were bowling a full length to him at bay. He also stitched fine partnerships with Moeen Ali, the debutant and Matt Prior, the experienced wicketkeeper-batsman. Prior even went onto make a half-century.

Prior though, did survive a close lbw decision off Rangana Herath’s bowling. It was given not out initially by Paul Reiffel, the umpire. However, the decision  was reviewed by Sri Lanka and it was decided that it was an umpire’s call with Prior ever so marginally outside the line of his off-stump. Finally, England will be happy with the position they are in, especially after they lost early wickets. 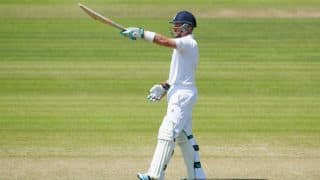 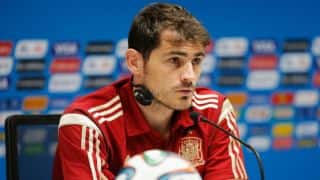