England's James Anderson is optimistic that the result in the upcoming Test series against Sri Lanka will not make himself or Alastair Cook feel as "crushed" as they did during the Lions 2014 win.

London: England paceman James Anderson is optimistic that whatever happens in the upcoming Test series against Sri Lanka neither he nor captain Alastair Cook will feel as “crushed” as they did during the tourists’ 2014 triumph. The teams begin a three-match series at Headingley on May 19, the ground where, two years ago, Sri Lanka clinched a dramatic 1-0 win in what was then the second of a two-Test campaign when Anderson was dismissed off the penultimate ball of the match.  “To get within two balls I did feel crushed at the end of it,” said Anderson. “It had been a long game and we came so close.” ALSO READ:Kusal Mendis, Nirosha Dickwella shine for Sri Lanka against Essex

England, thanks mainly to Moeen Ali’s maiden Test hundred, nearly saved the game having seen Sri Lanka cling on for a draw at Lord’s. But the damage at Headingley had been done on a fourth day where Sri Lanka captain Angelo Mathews made a superb 160 and, significantly, shared a stand of 149 for the eighth wicket with tailender Rangana Herath. Cook’s tactically naive ploy of feeding Mathews runs in order to get at Herath backfired spectacularly.

The England skipper repeatedly stationed four men on the rope for the first four balls of an over only for Mathews to respond by going on the offensive, with 16 of his eventual 25 fours coming off the last two balls of an over. At the end of a draining match, Anderson had to choke back tears while afterwards Cook, whose approach was widely criticised, especially by Australia great Shane Warne, pondered resigning the captaincy. ALSO READ: Angelo Mathews questions new points system for Sri Lanka tour of England 2016

But Anderson feels the growing authority Cook has been given by England’s Australian coach Trevor Bayliss, who took charge for the team’s 2015 Ashes triumph, means there’s no danger of his longstanding skipper letting a situation drift again. “It was gutting really and hopefully we’ll not be in that situation again this time,” said Anderson, England’s all-time most successful Test bowler, with 433 wickets to his credit.

“With a change of coach and a few different players in there as well, the last 12 months have been a real breath of fresh air.” Anderson, 33, said he felt Cook’s increasing command had been evident during both last year’s Ashes win and the subsequent Test series triumph in South Africa, comparing the control the Essex opener now has in the dressing room to that of successful Australia captains Allan Border, Mark Taylor and Steve Waugh.

“I think Cooky’s done a fantastic job. Certainly since Trevor’s come in he’s taken more responsibility,” said Anderson, speaking at Lord’s on becoming an ambassador for Brut Sport Style. “He’s the guy that people look up to and he’s in charge. Obviously Trevor’s given him that responsibility so that’s been good. All the teams I’ve ever played in it’s always been the coach at the forefront, so for the captain to be in charge, from what I hear that’s the way the Australians did it all the way through their success”, he added.

“So yes possibly he (Cook) is better equipped to deal with situations like that day against Sri Lanka now. “But days like that aren’t just down to him, you need your bowlers to perform, senior players to step up and actually help out and I think everyone just disappeared then into a hole in the field.

“It was everyone’s fault that day. So the way you get rid of situations like that is by the captain learning from those sorts of days and the players have to do that as well”, Anderson concluded. 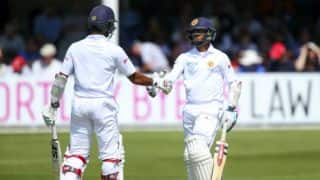 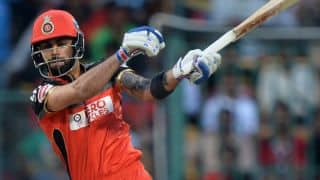