Sri Lanka will look to avenge their Test series defeat in the ODI series against England.

England take on Sri Lanka in the first One-Day International (ODI) at Nottingham. Sri Lanka will be looking to bounce back in this series following a 2-0 loss in the Test series. Their players are in good form after a 2-0 clean sweep of Ireland in the recently concluded ODI series. England on the other hand will look to carry their momentum into the shorter format as well. Sri Lanka will be without the services of Shaminda Eranga, who was recently banned from bowling in international cricket as his action was found illegal. Ben Stokes will not take part in the series for England as he is yet to recover from an injury. FULL CRICKET SCORECARD: England vs Sri Lanka 2016, 1st ODI at Nottingham

Eoin Morgan will take charge of the side for the first time since the T20 World Cup final loss at the hands of the West Indies. Jonathan Bairstow has been included in the ODI team as well, following his excellent show in the Test series. But with Jos Buttler too in the squad, Bairstow will play solely as a batsman.  The ODI team otherwise does not have too many drastic changes. England vs Sri Lanka 2016, 1st ODI at Nottingham: Preview

There were a few eyebrows raised when Farveez Maharoof was picked in the ODI squad. He got a game against Ireland and did a good job. However, his inclusion in the playing XI against England is not confirmed as Sri Lanka have others fast bowlers, who can do the job for them. Sri Lanka led by Angelo Mathews will hope that they can put in a much better show in the limited-overs fixtures. There will also be a one-off T20I played following the five-match ODI series. 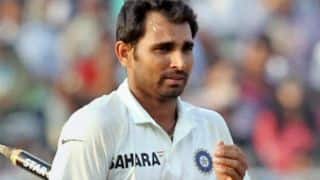