England will aim to put up a strong performance with the bat after bundling out Sri Lanka for a modest 257.

Hello and welcome to CricketCountry’s live blog of the second day’s play between England and Sri Lanka at Headingley. I’m Shiamak Unwalla, and I will be bringing you the momentary updates of the game. England will aim to put up a strong performance with the bat after bundling out Sri Lanka for a modest 257 in their first innings, on the second day of the second Test match at Headingley in Leeds. England will resume their innings at 36 for no loss with Alastair Cook and Sam Robson at the crease.

Liam Plunkett took his Test-best figures and Stuart Broad his second Test hat-trick as Sri Lanka were bowled out for 257 by England on the first day of the second Test at Headingley on Friday. Fast bowler Plunkett, on his Yorkshire home ground, took five for 64 in only his second Test in seven years after he was recalled for the drawn first match of this two-Test series at Lord’s, AFP reported.

Broad, who previously took a hat-trick against India at Trent Bridge in 2011, became the first England bowler, and only the fourth in all, to perform the feat twice in Tests after Australia’s Hugh Trumble, Jimmy Matthews and Pakistan’s Wasim Akram, when he removed Kumar Sangakkara (79), Dinesh Chandimal (45) and Shaminda Eranga with successive deliveries split across two overs. 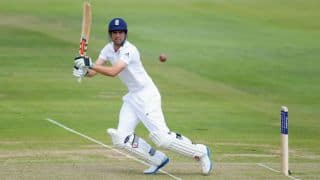 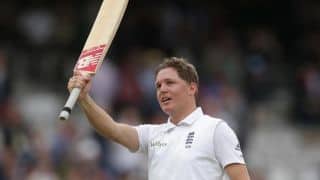