This is Jonathan Bairstow's second century of the series, third overall.

London: England’s Jonathan Bairstow ticked off another of his career targets by scoring a Test century at Lord’s on Thursday. The Yorkshire wicket-keeper/batsman’s unbeaten 107 was the cornerstone of England’s 279 for six on the first day of the third Test against Sri Lanka. Prior to the start of the series, Bairstow — the son of the late former Yorkshire and England keeper David Bairstow — said two of his ‘bucket list’ targets were to score Test centuries at his Headingley home ground and Lord’s. And now he has realised both dreams within a month. “It’s been an amazing few weeks,” said Bairstow. FULL CRICKET SCORECARD: England  vs  Sri Lanka , 3rd Test match at Lord’s

At Headingley, Bairstow revived England from the depths of 83 for five in the first Test with a superb 140 in a match England eventually won by an innings and 88 runs, With England already 2-0 up in the three-match series, Bairstow walked out to bat on Thursday in another difficult situation at 84 for four. FULL CRICKET BLOG: ENG vs SL 2016 Live Cricket Score, 3rd Test, Day 1

Dropped on 70 at Headingley, Bairstow was missed on 11 at Lord’s when Shaminda Eranga floored a routine catch at mid-wicket. He also survived a reviewed lbw appeal on 56. For Bairstow there was added satisfaction Thursday in that he had finally nailed down a place on the Lord’s dressing room honours board, having come agonisingly close with 95 in a Test at ‘the home of cricket’ against South Africa shortly after the 2012 London Olympics.

“It was five runs that loomed over me for a few years, and many people speculated about ‘can he, can’t he? It’s nice to kind of put the record straight a little bit. I hope now it’s not the only time I can get on the board,” said Bairstow.

Bairstow, asked to compare his two centuries against Sri Lanka, added: “That hundred at Headingley is one at your home ground, where you’ve grown up — very, very special in my heart. “My dad played there for so many years, my mum works there [on Yorkshire’s administration staff], and I’ve played there now too — having been an Under-11 as a Yorkshire boy and come all the way through. At Lord’s, it’s a completely different atmosphere … [and] at the same time a superbly special place to play cricket.”

Bairstow’s career went into something of a dip after his 95 and it wasn’t until January that the 26-year-old scored the first of his three Test centuries. “There’s been a lot of talk about my technique over however many years, but at the moment I’m pleased with the way I’m striking the ball and moving,” said Bairstow.

The worth of his runs will only become apparent when Sri Lanka, who produced a Jekyll and Hyde performance in making 101 and 475 during a nine-wicket defeat in the second Test at the Riverside, bat at Lord’s.

Sri Lanka left-arm spinner Rangana Herath, who took a commendable two for 45 in 21 overs on Thursday, said: “We need to bat well in our first innings. Our batting in the first innings has been disappointing. “We need to do the [basic] disciplines right.” 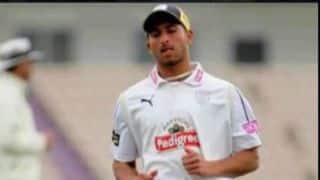 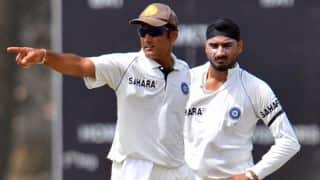