Sri Lanka trail by 254 runs. They will be looking to post a big total in the first innings and put England under pressure

England and Sri Lanka will come out at Lords for the Day 3 of the 3rd Test of Sri Lanka’s tour of England. England has already won the series as they lead by 2-0 after beating Sri Lanka at Chester-le Street. Sri Lanka will be stepping in to win some respect at the end of the Test series. England were able to score 416 runs all out, thanks to Jonny Bairstow’s unbeaten knock of 167. Sri Lanka came into bat and looked positive. They lost only one wicket at the end of Day 3. They are 1 for 162 in 49 overs. Opener Dimuth Karunaratne was the only batsman to go back to the pavilion after scoring his half century. Kaushal Silva (79) and Kusal Mendis will be coming out to bat as Sri Lanka are trailing by 254 runs. FULL CRICKET SCORECARD: England  vs  Sri Lanka , 3rd Test match at Lord’s

Steven Finn was the only bowler who succeeded in taking a wicket on Day 2 for England. Rangana Herath did pretty well by sending four batsmen back to the pavilion while wrapping up the tail. He recently completed his 300 wickets in Test Cricket. Sri Lankan batsmen have grown with the passing of the series as they have an slight edge over England in this match with only one wicket down.

England were once again saved by the heroics of wicketkeeper batsman Jonny Bairstow who remained unbeaten at the end scoring 167. He was running out of partners as England innings wrapped up for 416 on Day 2. Skipper Alastair Cook scored 85 runs to put the innings back on track before losing his wicket. Woakes (66) scored half century to keep the scoreboard moving. 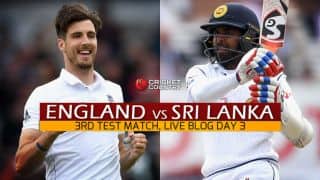 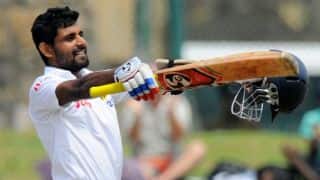