The West Indies have nearly caught up with the English, trailing by just 45 with 7 wickets in hand.

Opener Kraigg Brathwaite slammed a fine half-century in the first session as West Indies slowly and steadily edged towards England’s first innings score on the third day of first Test at Ageas Bowl in Southampton on Friday. The visitors went into Lunch at 159/3, trailing England by just 45 runs with seven wickets in the bag.

Starting at their overnight score of 57/1, Brathwaite and Shai Hope weathered the early storm and batted with extreme caution to avoid any mishap. The Windies duo took the score past the 100-run mark.

The 59-run stand was eventually broken by spinner Dominic Bess as he got rid of Hope for 16. The right-hander edged the ball into the hands of stand-in captain Ben Stokes who was standing at the first slip.

Brathwaite, on the other hand, kept his composure and went past the fifty-run mark in the 37th over. This was his first half-century in 22 Test innings.

He, along with Shamarh Brooks, kept the scoreboard ticking, till Brathwaite was dismissed by Stokes for 65. In the 42nd over, Brathwaite hit three boundaries but on the last ball was trapped LBW by the England talisman. The opener’s 125-ball innings included six boundaries.

Brooks (27*) and Roston Chase (13*) then kept the England bowlers at bay for the final few overs before lunch was called by the officials. 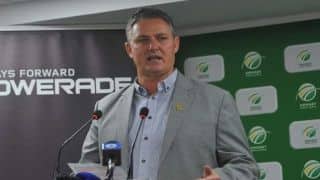