Root hinted that the two-seamers would be rotated in the future to lessen their respective workloads.

Hailed as one of the most destructive bowling pairs in modern-day cricket – James Anderson and Stuart Broad have scripted several memorable triumphs for England cricket team. The duo has taken more than 1,000 Test wickets between them for England and have been one of the main reasons why the team has seen tremendous success in the last decade. However, lately, both the stalwarts have made limited appearances for England together as they are approaching fag end of their careers.

England captain Joe Root urged naysayers to write off Anderson and Broad individually at their own peril even though he dropped hints that their days as a pair may be over. Anderson was rested for the second Test after West Indies handed hosts England a four-wicket defeat in the series opener.

On the other hand, Broad missed a home Test for the first time since he was rested against the West Indies in 2012. He is expected to replace Anderson in the second Test at the Old Trafford.

“With Stuart and Jimmy, trying to maximize their careers is really important to make sure they are playing for as long as possible,” Root said.

Root hinted that the two-seamers would be rotated in the future to lessen their respective workloads.

“If that has to be slightly different to how it has been over the last few years, then we might have to think outside the box and not play them in every game or not play them together all the time,” Root said.

“That is not to say it won’t happen again. They are two world-class performers and we are very, very lucky to have them.”

“I think to wish that away early or to push them to one side would be stupid, I really do. [But] I think we’ve got to deal with it well and be smart with it and we will find opportunities to play other guys, too,” Root added.

England’s top two wicket-takers, Anderson and Broad have featured in 116 Tests together, picking up 883 wickets. 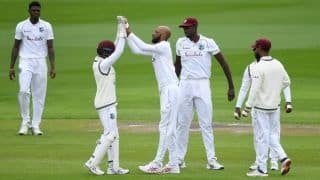