West Indies emerged from the horror of Edgbaston Test like a bruised and battered lion against England in the second Test of the series. After the bowling ruled roost on opening day, it was Kraigg Brathwaite and Shai Hope that instilled fear in the likes of James Anderson, Stuart Broad and co. on second day at Leeds. The Headingley Test has so been all about, how Jason Holder and his men have answered their critics in remarkable fashion. The pair of Brathwaite and Shai put on a mammoth 246-run stand to help West Indies take a crucial lead of 71 runs at stumps.

Shai Hope scored his maiden Test ton in 159 balls that included 17 fours. Brathwaite, on the other hand became only the second West Indies opener to score a hundred since 1988. This was also the first time two West Indies scored a century in the same innings in England after 2012.

England skipper Joe Root looked frustrated and out of ideas in the middle as Brathwaite and Shai went past their 200-run stand. This also West Indies first 200+ run stand after Shivnarine Chanderpaul and Denesh Ramdin achieved in 2013.

West Indies took lead as soon as the new-ball was taken by England. The pair soon eclipsed the highest stand (236*) for any wicket for West Indies in away conditions since 2000 (Bangladesh excluded).

After a long, long time Shai gave England a chance on 128 with the ball just dropping short of backward point. Soon, Broad snapped up Brathwaite for 134. Batsman stayed deep rooted in the crease to a fuller-length ball that crept past the bat and pad.

Roston Chase came out in the middle to carry on the good work Kraigg accomplished but failed to do so. His innings came to an end trying to fend Ben Stokes. Chase was caught unaware by the extra bounce that found an edge to Cook at slip.

The day started with Anderson snatching quick wickets to down West Indies’ any hope of a revival. Sadly for them, Kraigg and Shai joined forces to push England on the back foot. They missed, fended, drove, swayed and pulled against a strong English attack to help themselves to runs. Kraigg in the second session recorded his sixth Test ton; also his first in England. 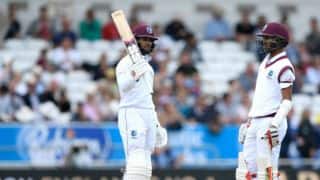 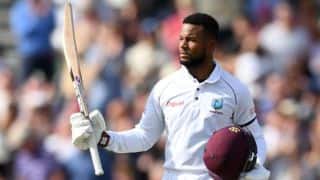