Joe Root’s unbeaten 45 and Mark Stoneman’s fighting, maiden Test fifty kept England in hunt, as they closed Day Three at 171 for 3, with a 2-run lead. The last time England won a Test after facing deficit of 150 or more runs was in 2008 against New Zealand at Old Trafford. Root received gutsy support from Dawid Malan who remained unbeaten on 21. Their partnership of 77 runs overturned the West Indies fortunes which was set by Jason Holder and co. over the past two days. Holder not only shone with bat but also showed his aggressiveness with the ball, scalping the important wickets of openers Alastair Cook and Tom Westley. However, some sloppiness on the field and poor captaincy skills costed West Indies in the last one hour.

Holder continued from where he left from the previous session. At the beginning of the third session, Westley mistimed an outswinger for a drive, edging it to Shane Dowrich for a simple catch. West Indies followed it up by consistently bowling brilliant lines to Root and Stoneman. The result was 5 consecutive maiden overs. It was on Root s 21st delivery that he got off the mark, with a boundary.

Stoneman raced to his maiden fifty off 107 deliveries, thereby making his chance count for the upcoming Ashes as well. However, after providing a 13-run stand for third wicket, Stoneman fell for peach of a delivery by Shannon Gabriel.

Malan, along with Root, was off the mark with a boundary to mid-off. Root also picked the pace and his timely boundaries began to flourish. If the West Indies bowlers were keeping England on their toes with tight lines, the fielders paved the way for the hosts to pile on runs.

Root got lucky once when Kyle Hope dropped him for 10 at gully. They had done the same in the first innings when Ben Stokes was dropped twice, eventually scoring a century.

Root was given another reprieve when he was batting at 35. Holder pinned him on middle and leg. However, an instant review was taken by the skipper that in turn favoured the hosts, missing leg stump. There was no sign of West Indies star bowler Devendra Bishoo. Although he was given two overs, Holder stuck to his tried-and-tested methods.

Earlier, James Anderson continued his stupendous form and romped over the West Indies batting line-up nabbing Shai Hope and Dowrich in consecutive deliveries. Holder denied a hat-trick to Anderson and stitched a gritty partnership with Jermaine Blackwood for the eighth wicket. West Indies were done by England for 427 with a lead of 169. If stats are to be believed, West Indies have never lost after gaining first innings lead of 150-plus runs, in the previous 116 instances.

In response, Stoneman and Cook put up a steady opening stand of 58, the second 50-run opening stand for England this summer. Stoneman piled on the runs after Cook’s dismissal, with England trailing by 101 runs at tea. 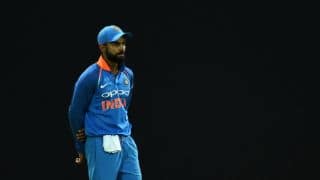