Dawid Malan and Ben Stokes struck fifties in the second session before West Indies bounced back.

England were in command for most part of the second session, but Roston Chase‘s 3 for 57 turned things around for West Indies in the second Test at Headingley. England still lead by 188 runs at tea and will hope for some contribution from their lower order to post a decent score. West Indies, on the other hand, will be eager to wrap up the English innings soon after the break.

How West Indies crawled back:

Dawid Malan and Ben Stokes continued to pile runs in the second session. Malan wasn’t impressive to begin with, especially with his drives, but kept a steady head to bring up his second fifty. Stokes, on the other end, scored runs at will and moved onto his 11th half-century at a brisk rate. Jason Holder rotated his bowlers, and finally Chase delivered. After adding 91 with Malan, Stokes went for a glory shot to unsettle Chase but was caught at wide long off.

This triggered a mini-collapse. Malan missed a slightly quicker straight delivery from Chase to be dismissed at 61. His innings comprised of 186 balls. Jonny Bairstow was expected to bat along with the tail but he took risks early in his innings and paid for it. He went for a reverse sweep to a ball on the leg stump and missed the length completely. He departed for 18. Chase kept it full, straight and mixed his pace.

However, Moeen Ali and Chris Woakes are still battling it out for the hosts and will look to stretch the lead. West Indies will be wary of the James Anderson-Stuart Broad threat in the fourth innings, and will not like to chase anything beyond 230. 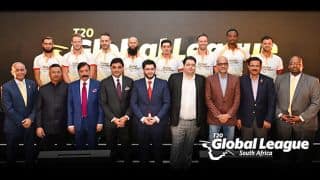 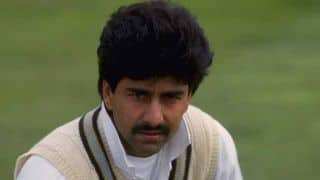