High on confidence after knocking English stalwarts in the morning session, West Indies started the second session with equal spirit. It took a valiant effort from England skipper Joe Root and Ben Stokes to bring back some substance to the innings. The pair snitched a 69-run stand for the fifth wicket, before it was Devendra Bishoo that brought the visitors back in the game. Going into tea on Day 1, England are 156 for 6 with Stokes and Moeen Ali at the crease.

To start off Jason Holder knocked over David Malan for nine. Malan playing on the rise managed to help the ball onto his stumps with a thick inside-edge. Ben Stokes soon joined Root. Holder, along with Shannon Gabriel bowled to their hearts content and brought some life in the contest. Root in partnership with Stokes swayed West Indies threat.

Root meanwhile reached his 31st fifty in Tests in 87 balls. With this he also equalled AB de Villiers record of fifties in twelve successive Tests. Stokes, on the other hand, kept the flow of runs steady and latched onto anything that was loose. Just as things were looking good for the hosts, Bishoo struck gold. Trying to play the sweep shot, Root took on an outside off stump ball that found a leading edge straight into the hands of Jermaine Blackwood at slip. He departed for a 98-ball 59.

Soon, Moeen Ali found his way in the middle just on the brink of tea with Stokes unbeaten on 45*. 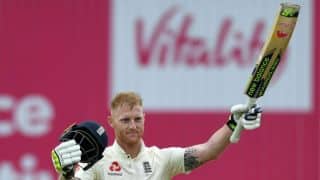