Ben Stokes and Toby Roland-Jones took five wickets before tea and swung the momentum towards England.

West Indies lost 5 wickets in the second session at Lord’s. They started the session at a hopeless-looking 35 for 2. Then things got worse: Ben Stokes and Toby Roland-Jones rattled the feeble West Indians with high-quality seam movement and swung no pun intended the momentum towards England. The visitors now stutter at 119 for 7.

Shai Hope walked down the pitch towards James Anderson and kept tapping his bat onto the track, pretending to heal the cracks. Anderson finished his follow-through, went back to the umpire, put his sweater on, strolled towards Hope, and kept gazing at him, but the West Indian refused to share eye contact, trying to irk Anderson.

In a pursuit of making further inroads, Root rested Anderson and passed the onus on to Roland-Jones. Like his seniors, Roland-Jones hit the corridor of uncertainty and swung the ball from there. The West Indians left the ones that moved away and dabbed the ones coming in. Roland-Jones, all the same, persisted with the same line and length. The contest appeared to seem monotonous at a point, but the bowler had the last laugh. After a 56-ball phase of survival, Hope jabbed at an out-swinging delivery, edging it to Alastair Cook at first-slip.

Until then Stokes had very little to play, apart from stopping boundaries at gully. When he was summoned for bowling, his appetite for being in the thick of things became apparent. Coming round the wicket, he had Powell caught and bowled.

Matters turned worse for West Indies when Roland-Jones snorted one back and through Jermaine Blackwood s defence. In a matter of 4 overs West Indies lost three batsmen, also losing the battle of survival.

Root stretched Stokes’ spell, given the ball started reverse-swinging a bit and his all-rounder was in wonderful rhythm. Stokes did what was asked of him. He knocked over the dangerous Roston Chase. The ball swooshed away at the last moment and clipped the top of off-stump. Two deliveries later Shane Dowrich edged, and Stokes had 3 in less than 8 overs.

Root brought back Anderson at the stroke of tea, largely to respond to the spectators’ demand. The stadium roared and clapped for the champion, waiting for the moment of glory. But the West Indians delayed the party, denying Anderson his 500th wicket before tea. 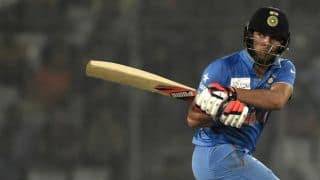