A fungal infection known to gardeners as 'fairy rings' appears to have taken root on the square, causing several unusual markings on the pitch.

London: Forget the Lord’s slope — Thursday’s Test between England and the West Indies could feature the Lord’s ‘splodge’. A fungal infection known to gardeners as ‘fairy rings’ appears to have taken root on the square, causing several unusual markings on the pitch — including one on a good length at the Pavilion End. “It is a natural phenomenon and is not expected to have any impact on play,” said a spokesman for Marylebone Cricket Club (MCC), the owners of Lord’s.

Never before has a Test at Lord’s started in September and that may well explain why few observers could recall seeing such ‘rings’ — a common enough sight on club squares at this time of year — on a pitch at ‘the home of cricket’ before. Did you know Headingley Test of 1972 is possibly the only one to be named after a fungus.

Batsmen on both sides could now — if the markings don’t evaporate overnight — have something else to blame should they be dismissed cheaply during the Test. “I saw it from around where the (limited-overs) 30-yard circle would be and was wondering what it was and if it would have any effect,” West Indies captain Jason Holder told reporters at Lord’s on Wednesday.

As for the possibility of batsmen being distracted, Holder added: “Only time will tell but we hope it doesn’t (prove a distraction) and the guys can put it aside. “You’re pretty much looking at the bowler’s hand, and that’s a lot higher than where the patch is – so I hope the guys can focus on the bowler’s arm, and not the pitch.”

Traditionally, it is the eight foot (2.5 metre) slope running across the ground from the Grandstand down to The Tavern that is the biggest visual quirk facing teams at Lord’s, with visiting bowlers having to adjust their line and work out whether they would rather run in from the Pavilion End or the Nursery End.

Most of the West Indies side will be playing their first Test match at Lord’s on Thursday and they have consulted Paul Hutchison, the former left-arm paceman who played at Lord’s for Middlesex.

“We’ve tried to get as much information as possible coming into this game,” said Barbados’s Holder.

“We’ve got the luxury of having an outsider, Paul Hutchison give us some tips about how to bowl here at Lord’s. There’s a lot of talk about the slope and such and we’ve studied it and had a chance to formulate some plans about how we go it.”

However, the 25-year-old pace-bowling all-rounder added: “But cricket is always played on the day. You may be faced with different dilemmas and you just have to adjust and cope with it. That’s the nature of professional sport.” 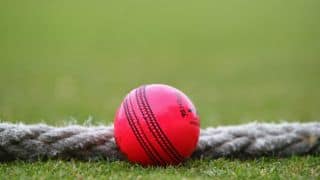