A rainy Monday in Manchester prevented a ball from being bowled. England need eight wickets to seal the series 2-1.

Rain held up England’s victory charge as no play was possible on Day 4 of the third and final Test against West Indies at Old Trafford, Manchester.

The Windies were to resume on 10/2 after being set 399 to win. Shai Hope (4) and Kraigg Brathwaite (2) were unbeaten at stumps on Day 3 after Stuart Broad removed John Campbell and nightwatchman Kemar Roach.

Broad will have to wait another night for his 500th Test wicket, being on 499 currently. The 34-year-old has so far taken eight wickets in the game.

A rainy Monday in Manchester prevented a ball from being bowled. England, led by Joe Root, will hope they have enough time to regain the Wisden Trophy on Day 5.

Earlier, the Windies were bowled out for 197 in response to England’s 369. Broad took 6/31, while skipper Jason Holder top-scored for the visitors with 46.

The Windies had won the Southampton Test — the opening game of the series — by four wickets. Hosts England bounced back in the second Test in Manchester with a comfortable 113-run win. 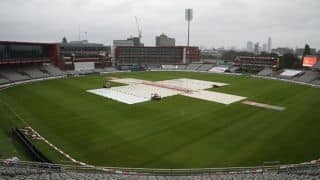