Let us look at a few key battles that could decide the fortunes of both sides at The Oval.

England have hardly given an inch to the West Indies, post their defeat in the second Test at Headingley, Leeds. In the ongoing One-Day International series, England have a 2-0 lead and will look to smash the final nail in the coffin come fourth ODI at The Oval. West Indies, on the other will bank on their senior pros to level series and have an all out fight at Southampton on Friday.

Let us look at a few key battles that could decide the fortunes of both sides at The Oval.

Moeen Ali vs Devendra Bishoo: Moeen picked England from the ruins at Bristol and led them into a position of strength. England once on 217 for 6, where helped from a 52-ball 100 by Moeen to reach 369. His onslaught saw West Indies shield into a shell.

The only bowler who was under bowled was Bishoo. He was held back by Jason Holder because of Moeen, but was able to maintain pressure all times. It will be fun to see how Bishoo is used against Moeen here.

Joe Root vs Miguel Cummins: Root is on a brink of a England record. Another 60 runs in this game and he will become the fastest Englishman to 4,000 ODI runs. At Bristol he was quite severe on the visitors bowling making a quick-fire 84.

Cummins has impressed one and all with his pace, will look to rekindle his show. Cummins in the last match tormented England top-order removing the likes of Alex Hales, Root and Ben Stokes.

Chris Gayle vs Chris Woakes: Gayle narrowly missed out a well-deserved hundred by 6 runs. He would be eager to get to his landmark yet again, given his form it could happen at The Oval.

Woakes kept his own against Gayle at Bristol and contained the hefty left-hander time and again. He troubled Gayle with line and length bowling denying him any room whatsoever.

It will be interesting contest to see who comes out on top in round 2.

Eoin Morgan vs Jason Holder: In the battles of the captains, so far Morgan has prevailed leading him team to two win. Holder, on the other hand has been the better of the two players on the field with both bat and ball.

In the last game, Holder got Morgan for a golden-duck. With Ben Stokes not there in the middle-order, Morgan will be hopeful for a change of fortunes this time around. 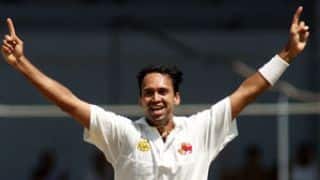