This will be the first match between England and West Indies at The Rose Bowl, Southampton.

Eoin Morgan and his men will look to deny the visitors a consolatory win, and head into The Ashes 2017-18 high on confidence.

West Indies, meanwhile, have quite a few errands to run; for example, Jason Holder s unavailability and Evin Lewis injury. England too have their pressing issues to take care of, namely Ben Stokes street-brawl case.

It will be interesting if the England and Wales Cricket Board (ECB) bring back Stokes for the final ODI, given their no non-sense policy. Alex Hales, who was also seen in the alleged brawl video, is unsure of a place now.

England, in all probability, will not make any changes to the winning combination. If Stokes and Hales return, the players most likely to face the axe are Jason Roy and Sam Billings. Moving Roy out will be a tough ask post his 84-run blitz. They might give Liam Plunkett rest and bring in Tom Curran.

Jason Mohammed will captain West Indies in the fifth and final ODI. West Indies have confirmed that Carlos Brathwaite will come in for Holder at The Rose Bowl. Holder has travelled back home to attend his uncle s funeral. This could very well be the last time one sees Chris Gayle and Marlon Samuels play in an ODI in England.

Gayle averages 50.23 in 17 matches, and would like to keep this mark breached after the final ODI as well.

With Lewis out of the series, Kyle Hope will take up his place. Kyle has been in poor form off late, but his last outing gives him another chance to stake claim for upcoming series.

1 – This will be the first match between England and West Indies at The Rose Bowl, Southampton. 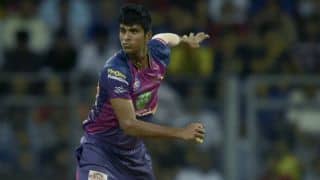