Currently, England are 13 for the loss of three wickets in three overs against England in T20 World Cup Final 2016.

West Indies batsman Lendl Simmons was dismissed for an unfortunate duck by fast bowler David Willey, after being trapped leg-before, against fellow former champions West Indies in the final of the ongoing ICC World T20 2016 at the historic Eden Gardens Stadium in Kolkata on Sunday. It was a straight ball on the pads, as Simmons was confused wheter to play a shot or defend, as he went for a flick on the leg side, missed the ball vompletely that was rising, Willey went for the appeal, and up went the finger of Rod Tucker. Currently, England are 13 for the loss of three wickets in three overs, with Marlon Samuels on seven and Dwayne Bravo coming in. LIVE CRICKET SCORECARD: England vs West Indies, ICC World T20 2016, Final at Kolkata

Earlier, West Indies skipper Darren Sammy made the right call and won the toss, as he elected to bat first, while he moved in with an unchanged squad from the semi-final win over India. England skipper, Eoin Morgan too moved in with an unchanged squad, following the victory over New Zealand in the semi-final. England posted a challenging total of 155 for the loss of nine wickets in 20 Overs, courtesy of a half-century from Joe Root, while Dwayne Bravo and Carlos Brathwaite claimed three wickets each. LIVE CRICKET UPDATES: England vs West Indies, ICC World T20 2016, Final at Kolkata

Having slayed the giants of ICC T20 World Cup 2016 — India and New Zealand — in their respective semi-finals, West Indies and England clash in the final of the tournament at the iconic Eden Gardens in Kolkata on Sunday night. For many in the cricket fraternity, neither West Indies nor England were among the favourites when the tournament began. But both teams surprised with their distinct brands of cricket, setting themselves perfectly to have a crack at the World T20 trophy for the second time in their history. It will be truly hard to pick a favourite for this clash, as both West Indies and England can mercilessly scourge the best of the oppositions on their day. 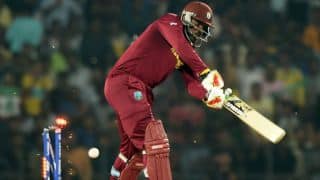