The live streaming of the match will be available on hotstar.com and the match can be viewed on Star Sports HD 2 and Star Sports 2.

West Indies would hope to continue their remarkable turnaround riding on the centuries of Kraigg Brathwaite and Shai Hope on Day Three of the second Test at Headingley. At the close of Day Two, West Indies were ahead with 71-run lead at 329 for 5 against England. Brathwaite and Hope secured the highest partnership for fourth wicket. This was the also West Indies first 200+ stand after Shivnarine Chanderpaul and Denesh Ramdin achieved in 2013. James Anderson’s aggressive bowling did try to dent West Indies morale. However, Brathwaite and Hope joined forces to avoid another Edgbaston story. The live streaming of the match will be available on hotstar.com and the match can be viewed on Star Sports HD 2 and Star Sports 2. In England, the match can be viewed on Sky Sports 2 HD and Sky Sports 2.

After the West Indies resumed on 19 for one, Anderson made short work of nightwatchman Devendra Bishoo and Kyle Hope on his way to brilliant lunch figures of three for 10 in 12 overs, having accounted for Kieran Powell on Friday. Brathwaite, who resumed on 13 not out, successfully reviewed lbw decisions on 35 and 46, after getting an inside edge to Stuart Broad and being outside off stump playing a shot to off-spinner Moeen Ali. The very next ball after Ali’s appeal was overturned, Brathwaite drove him for six to go to fifty. After lunch, Shai Hope completed his fifty when he drove Woakes down the ground for his ninth four in 72 balls.

Having reached his fifty with a six, Brathwaite went to his hundred with another when he lofted Westley’s fifth ball high over long-on. It was a stylish way for the 24-year-old to complete his sixth hundred in 39 Tests off 189 balls, also including 13 fours. Shai Hope, 85 not out at tea, went to 99 with a pulled four up on one leg off Ben Stokes. 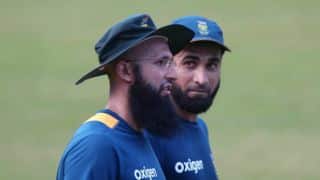